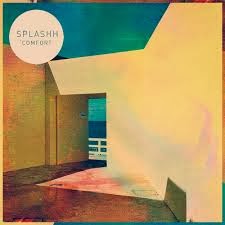 And the bandwagon drove on and many a band jumps on. The bandwagon of neo-psychedelica. Splashh is a latest addition that caught my attention and amuses me. Flegmatic, slightly electronically treated singing and up-tempo guitar driven songs that are not unlike Britpop anno the 00s, were it not that everything is phased somehow. Trippy and floating through space.

Splashh is a band from east London. Well, better it formed there, because members are three fourth antipodes from Down Under. Leaving just one UK lad. The band formed around 2012 and released several singles before releasing Comfort, making this album the official debut. Splashh certainly made one with Comfort. The album is varied, melodically strong and divers enough to make a dent. The music on Comfort is close just as easily to Foxygen as it is to The Rifles and circa 1980 bands as The Cure and even Live Wire. 'Vacation' has Simon Boswell's guitar sound in the verses. Vacation is not the best song on this album, but holds a fantastic mix of what Splashh is capable of. Trippy music on one end and great rocking out in the other part of the song.

It is in the way recognition is triggered within me that draws me to Comfort every time. It seems old and at the same time new enough to be interesting. This last element is important. a few months back I was wondering how many new new-folk(rock) bands I could handle, in October 2013 the question how many new-psychedelic bands can I handle is justified to ask. The answer will be the same: If I like it, I like it, if not, not. That is the way it should be. Splashh is on the edge, I'll admit. It is the youthful enthusiasm that saves Comfort. In 'Washed Up' the singing is to phlegmatic, the 'Why why why" repeated as if theres no end, bloody irritating the second time around. The guitar work and keyboards are all over the place in a great, positive way. Sasha Carlson's voice is not for every day and to be taken in small portions only. The bright side is that still Splashh's songs sparkle and often make a difference.

How come that in most neo-psychedelia bands singing is not the main part of the band? Because the main key references did not have great singers (at first in some cases) also? It is a fact that most new bands' singers hide their voices behind electronics and do not put a lot of emotion into the singing. Splashh is no exception to this rule. Time will tell whether the draw back will be outshone by the record as a whole. Up to this point it think it does. As a band Splashh makes Comfort a fun album to listen to and enjoy.