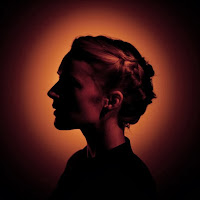 Three years ago Agnes Obel appeared on the musical stage with her debut album 'Philharmonics', an album that stood out in a hectic world. The sound was laid back, subdued and far from the madding crowd. Aventine takes off where 'Philharmonics' left off. Agnes Obel takes us down a road of isolated beauty and stillness, a road to sit down, relax, put on a headset and just listen.

The sleeve of Aventine is completely in sync with the Roman title. The Aventine being one of the seven hills of ancient (and present) Rome. She is viewed in profile, like a Roman of old, with light coming from behind. Still, stern, solemn, mouth slightly open. Like the music is also.

Aventine is all atmosphere. Opening with the piano instrumental 'Chord left'. Nothing more than a few chords and a modest, extremely serious melody. Small is the correct word, but anyone who cares to listen will recognize beauty instantly. 'Fuel to fire' takes this mood and builds on it. Agnes' voice is added and a cello weaves itself behind and through the piano notes. The voice is a mix of sweetness and a husky smokiness. My take is that Agnes Obel's voice is not very much different from the older Kate Bush, while her music has the same sort of mysticism. Her advantage is that she does not have a backcatalogue to compete with. Her take on music a more modest one, with less instruments around her. She's very confident about her music, as she dares to present her voice near bare. Another name that pops up is Enya, like in 'Orinoco flow'. Several songs on Aventine have the same direct, yet mystical, quality.

Aventine is an album that can escape me when I put it on and do not pay attention. It is so quiet and still, that it is over before I know it. Giving me the impression that it is only 15 or 20 minutes long. When I do listen, I'm drawn in by a few single cello notes played by Anne Mueller or picked violin notes by Mika Posen. Aventine does not take more to please me. It is in these small and subtle details that Aventine scores big. The accompaniment is of such subtlety that sometimes I need to strain to pick it up. Any noise seeping through, things that happen in a family situation, ruin the listening experience immediately. That makes Aventine a late night album, lights subdued and eyes closed for maximum effect.

Aventine holds a hint of classical piano sonatas, dreampop, triphop without a single hint at beats or scratching, a faint trace of pop. It sails on the edge of easy listening, is Celtic without any Celtic instruments and sounds. Aventine holds singer-songwriter qualities without a notable guitar in sight. Above all it holds Agnes Obel, an artist that knows where she is going and what she stands for. Above all it holds 'The curse' the song in which all of Aventine comes together. A song of intense beauty and boldness. A song rivaling the songs on Morgan MeCaskey's EP 'Righteous kind'. And that is a real feat, as I have not heard many albums this year that were better.

There is just not much more to write on Aventine. Go and undergo what Agnes Obel offers. It will speak to you or it won't. When it does you are in for a treat. So go for it, is the advice of