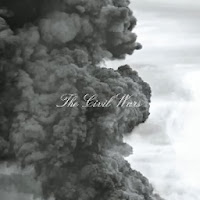 There's a calamity going on here as you can see. Thick, black smoke suggestion something's burning with a lot of oil product in there. It is not The Civil Wars the calamity is about. Its eponymous sophomore album is one big step forward from debut album 'Barton hollow'. This was an album I liked, but not enough to write about. It was o.k., but not really more than that. Having listened to The Civil Wars for several times now, I can state that this album has that little extra. However, now I'm reading up about all the prizes 'Barton hollow' has won, I'll admit that it must be my ears that are at fault, but that is the way it is.

The Civil Wars is a country/folk duo. Joy Williams and John Paul White (what's in a name?) are making music together since 2009 and so far have two albums to their name and a live album that is available through Noisetrade.com. The singer-songwriters met in 2008 and decided to start making music together. Although Keith has released one solo album before the duo, Joy Williams has released a whole bunch of albums. To describe them as the beauty and the beast is to simple. White sings too good for that. They complement each other nicely. Who listens to the a cappela part of 'From this valley' knows what I'm talking about. The singing is nigh perfect here. Changing the height of the notes, that are held super long, without falter, shows that these two know how to sing.

The Civils Wars is pushed into the country category, but to me most songs sound as if they could have been great Tammy Wynette or Dolly Parton songs, but certainly are not in these versions. The country is more in Joy Williams' voice than in the music. Just like The Parlour Soldiers, some songs are set in a more forceful setting, others soft and delicate. A matter of adding an electric guitar to the sound. This combination is a winner in 'Oh Henry', a full sounding song only because the voice of Williams is mixed completely to the foreground. With an acoustic and two electric guitars in the background and a Keith Richards like- sounding John Paul White singing in the back ground delivering mere accents.

It is the combination of songs that won me over for The Civil Wars. At the basis it is all one person, one guitar songs, that are fleshed out to a duo setting, with a minimum of additions. Rick Rubin is behind the knobs and tweedles, but seems to have used these as sparingly as possible for The Civil Wars. The production is totally clear, beautifully recorded and left alone after that. There may be an extra guitar, very sparse percussion in a few songs, even a violin in 'Sacred heart' (a French song); when it comes down to the bottom line this album is about two voices. Two voices curling and curving around each other like a snake on a vine. Interweaving and letting go, joining and parting in all the right places. This duo really found each others' voice and know that it is the better for it.

The Civil Wars is not spectacular. If it is, it is of spectacular great beauty. Radiant and glowing. Any one who enjoys beautiful singing and songs that need listening, should not pass this album by, says,