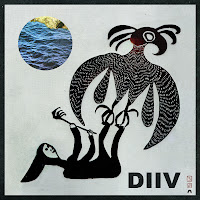 You can listen to 'How long have you known?' here.

Set your clocks for the eighties people! As this record, released in the year of our Lord 2012, is a great rehash of that what made the 80ties acceptable for circa half an album at a time. Big Country's first EP, The Cure on 'Seventeen Seconds' or 'Faith', Jesus & Mary Chain with the fuzz locked in the closet.

DIIV (formerly Dive) is a very new band from Brooklyn, New York. It started out as a new solo project of Zachery Cole Smith, who also or used to play guitar in a band called Beach Fossils. After a while he brought in other musicians. So DIIV became a band that could perform.

Oshin is a powerhouse of echo. The voices are drenched in it, just like the guitars. They sound as if they were recorded in the hulk of an empty tanker. Very much like The Cure is etched in my mind, although I haven't played them for years. (What's in a name, Smith?) If I take it even further back in time, I'd say that Hank B. Marvin is an influence on Smith's guitar playing and sound. Smith himself mentions Malinese guitarist Baba Salah as an influence. I'm not familiar with his work, but what I hear is that the rhythm guitar on Oshin plays these motives under the lead guitar in a very repetitive, African, way. This gives a song a distinct atmosphere that is different from the average indie song. 'How long have you known' is a very good example of this way of playing.

'Wait' introduces some noise or shoegaze elements to the mix. Layer upon layer of distorted guitars enter the song over the lead melody of just four notes played on a keyboard again and again. Making the song almost hypnotic. I think this is the overall impression on Oshin. The lightness of the sound and atmosphere make me feeling light in the head also. The repetition of the lead melody brings me in another state then before putting the record on.

DIIV is able to rock also. The up-tempo instrumental 'Druun, part 2' stands out, but perhaps because it reminds me most of 'A forest' which is still my favourite The Cure song. Zachery Smith seems to be in search of his voice as he disguises it a bit to a lot on Oshin. Perhaps he's not really a singer, perhaps he can't even really sing, but his, electronically treated, voice fits the songs. Apart from that he has come up with some original guitar melodies.

Like a true 80ties album my interest wanes a bit towards the end as Oshin tends to become a bit more of the same towards the end. 'Home' is not exactly a festival on fire kind of track, more of a gob stopper of a song. DIIV stays true to form, even in that way. This did not stop me listening to the album several times already and on the whole liking what I hear. It won't be the last time either. Anyone with a love for the acts mentioned and bands like them, should check Oshin out. DIIV stands out among them.

As trivia. I tried to find out where the album title stands for. Oshin is a Japanese tv series from the eighties. A(n Armenian) name. Something from Java. So should you know the meaning, let me know.

You can order Oshin here