The joy of singing. The Greater Good live in the Q-Bus 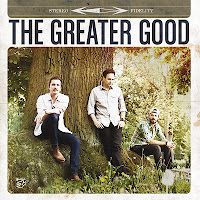 On Thursday 11 October 2012 it was a very special night in the Q-Bus in Leiden. Three singer-songwriters stepped up on stage to bring the unfortunately very small audience a night of beautiful, enraptured singing. L.A. based Shane Alexander, Dennis Kolen from Rotterdam and New Yorker Eugene Ruffolo blended their voices and guitars until they seemed one. Like a three headed vocal chord.

Accompanied by modest playing by bass player Wietze Zeedijk and keyboard player Ferry Lagendijk the whole focus lay on harmonising. Listening to the songs of The Greater Good for the first time, only one reference popped up the whole time: Crosby, Stills & Nash. The uncanny way in which the voices resonated in fairly complex sounding songs.Just like CS&N's first album doesn't have songs that go down easy on first listen. This is what happened in the Q-Bus also. I was listening in awe at what was happening, as the singing looked so effortless.

Further in to the performance, each singer took three leads thus dividing their contribution to the album, it was possible to make distinctions. Dennis Kolen puts the most effort into his performance, perhaps has to work hardest. Shane Alexander plays with his voice. In a higher register, but with depth also, warm and able to weave his voice in and out of the melody with ease. And it was just like Eugene Ruffolo wasn't there, but I'm sure he was the glue putting it all together, like David Crosby did. Also singing with ease, solo and in harmony and playing guitar in a very delicate way, almost as if he didn't touch the strings, but every time there was this intricate melody or notes played between the other two.

Each had small stories to tell, also to mask the time it takes to switch to another exotic tuning. There was even a story by Shane Alexander on the Wikipedia site on guitar tunings. It all contributed to make the atmosphere more intimate. I perfectly understand that every artist works to have a packed venue, but as an audience it is a privilege to be so up close and enjoy the show in (almost) perfect silence and dedication.

Each of the three performers did a solo spot of two songs from their own albums. As I wrote on Dennis and Shane in WoNo Magazine before, I will focus on Eugene Ruffolo. The modesty with which he presented himself struck me most, while at the same time singing two beautiful, delicate songs with total conviction and confidence made me very much interested to hear more from him in the future. Ruffolo's voice is very pleasant, while at the same time his fingers play bass, melody and lead at the same time accompanying his voice. A true singer-songwriter.

The three came back for an encore of Neil Young's 'Tell me why', song 10 on the album and the great sing along 'I shall be released'. And yes, we got to sing along and my higher harmony fitted quiet nicely in the back ground, thank you. With one more song the evening came to an end. There will be more on Dennis Kolen soon on this blog and be on the look out for Shane Alexander's new album early in 2013 (with a beautiful cover!, which I got to see). Let's hope that The Greater Good will get a follow up in the next few years as this is about as good as it gets where singing is concerned. True beauty!

You can order The Greater Good on vinyl here.