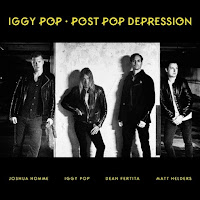 It's been years since I listened to a new Iggy Pop record beyond the first listen. Somewhere in the 90s, I suppose, although I can't even recollect the title. 'Brick By Brick'? No, not that obvious one. However, with that album title we have a link to Matt Helders, who sang a song by that title on the Arctic Monkeys album 'Suck It And See'. Helders drums on Iggy's latest effort, Josh Homme is there, as is Dean Fertita on things with strings and keyboards. The only one missing seems Mark Lanegan, but hey, we have Iggy.

Post Pop Depression is an aptly titled album, after the French sung albums. It is also an album that crept on me slowly. At first listen, I was not impressed. It wasn't bad, but not of the level I'd expected reading the names that collaborated. Not unlike that other collaboration of Josh Homme in the late 00s, Vultures something, I never got into that at the time. Another bridge though, as a song is called 'Vultures'. Remaining in style, it's the song I like less.

With Iggy there's always something that makes me give him a second chance. He has the treat him favourably factor for me. And so Post Pop Depression slowly became better and better, bringing me back from my personal Iggy depression.

Let me start with 'Gardenia', a song over which the ghost of David Bowie hovers. I can imagine him singing backing vocals here, in fact I seem to hear him. The song is a perfect Iggy Pop ballad, in which he sings with a deep voice, raking the bottom of his larynx clean.

The sound of this album is somewhat darker, but in some of the songs the atmosphere of 'Lust For Life' is called to mind. The punk part is gone, 'The Passenger' is all over the place. The hint of darkness and danger lurking somewhere. That is what started to trigger me. The guitars crawl through layers of dirt and come out sounding mean, creating an atmosphere in which the voice of Iggy Pop finds it way so easily. 'Sunday' is not a perfect composition. It is fairly simple. It is the mean sounding guitars, the soft backing vox by Helders and some ladies, while Iggy greases it all. Together they make a dirty blood diamond. One that needs a lot of work for many reasons, but shine it will. Make it to the end of 'Sunday' and find out.

A surprise is 'Chocolate Drop'. The song has an 'Another Brick In The Wall' rhythm and chord progression. From there imagination comes in. An exotic sound or two and a hint of Latin in the rhythm. Again the beautiful contrast between Iggy and Helders voice. The link with Arctic Monkeys returns in the intro of the final song 'Paraguay'. The song is far too light to qualify for Alex Turner c.s. but it's close.

The only thing against Post Pop Depression is that the album does not shine. Not like David Bowie made 'Lust For Life' shine and 'Brick By Brick' shone brightly. My guess is that this is a completely conscious decision. This album is meant to be dark and I better get used to it. Iggy Pop is back. Backed by a set of musicians with a great reputation themselves he has every right to be proud, as reception around the world shows.

You can listen to 'Gardenia' here: