Not To Disappear. Daughter 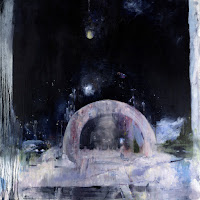 Not To Disappear is Daughter's second album, following 'If You Leave', that did not make it into these pages. It was not special enough in my opinion to get me into action. Something changed though. In some of the reviews I read something about the "difficult second album syndrome" that befell Daughter,  but I'm not detecting it. Not To Disappear is a dark album, but a solid one in its darkness. In fact, the music is so solidly mixed that at times I feel like that guy wading through a road of molten tar in that commercial from some years back. And coming back up.

Reading up on the band I read that music started in earnest for singer Elena Tonra when she was given a copy of Jeff Buckley's 'Grace'. No matter how different Daughter's music sounds, the influence is discernible. In the guitar and atmosphere. Unlike Buckley, Tonra almost hides in the music. Her soft, vulnerable voice is almost mixed into the music. Just another instrument and not a true leading lady. Her voice reminds me of Suzanne Vega. The same sort of whisper-singing or Beth Orton.

Tonra is accompanied by her partner, Swiss born Igor Haefeli on guitars and bass and drummer Remi Aguilella, who is French. Together they are responsible for a music that is ever so fleeting. There is so much atmosphere that it is suffocating when I'm not in the mood for Daughter. When I am however, some of the songs are so beautiful. Just listen to the lead guitar of 'Mothers'. Close your eyes and the notes carry you away to wherever you'd like to go.

Dance influences really enter the spectre in 'No Care'. There are hints at dance throughout Not To Disappear, but not like in the almost violent 'No Care'. There's no love lost in this song. Relentless the beat is kept up. Together with (parts of) 'To Belong' and 'Fossa' it is possible to imagine an audience starting to dance at a Daughter show and not just standing, listening enraptured as in a high mass of shared misery and anxiety. Over a whole album like Not To Disappear there has to be a release offered somewhere. Daughter has built that into the album at the right point. Not that I personally care for a song like 'No Care', it is the right song in the right place.

Not To Disappear is not a subtle album. As I wrote it is dense, a wall of sound, all thrown in together. That makes it an album which is tiring. I can't possibly listen to it the whole day, but taken in the right doses, this is just right. Whether the relationship deepens, remains to be seen. For now it is just fine.

You can listen to 'Doing The Right Thing' here: