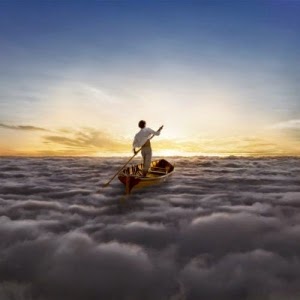 What to think of this album? An album with so much music, music by what is left of a band that for sure is one of my favourites of the past close to 40 years. There are so many familiar sounds on The endless river, that half of the time I want to burst out singing the songs that I carry with me for 34 to 39 years. All songs that are not on this album. What a strange experience that is.

With my discovery of 'Wish you were here' in the fall of 1975 I became a Pink Floyd fan. What an album! Discovering backwards I got as far as 'Atom heart mother'. After 'The wall' it was sort of over. Nothing since was as good as what went before. Solo or as a band. And now, The endless river. The story is that there were a bunch of left over instrumental pieces from 'The division bell' album, released in 1994. Richards Wright died in 2008, with him passing away any chance of a rumoured reunion stopped right there. In my opinion with Roger Waters finally cashing his legacy over the other three, there wasn't a chance at a reunion at all. And let's face it, his muse has died long ago as well.

Listening to some of the recordings on The endless river the story of the left overs is so hard to believe. Incredible even. 75% of The division bell sounded uninspired, extremely forced, a mere hint at an excuse to send the old beast around the world again. A lot on The endless river sounds extremely inspired, but also too close to call to the band's older work. With sounds so familiar, too familiar, then? Perhaps that is why it was left behind in 1994, while in 2014 it provides a final chance at an album? It may well be. Rick Wright came to the rescue, six years after his death.

The contribution of Rick Wright to Pink Floyd is one I always really appreciated. His organ, piano and synth sound were unique and an incremental part of the sound of this dinosaur progband of the 70s. In fact, listening to The endless river I even get the impression that his part in the band was gravely under-appreciated. It's his keyboards that constitute the main part of the sound. The sound that is always there. The foundation that allows David Gilmore to play his smooth sounding guitar (solos), that second part of the sound of Pink Floyd. Over which Roger Waters could sing, which is part part 3. Underneath that all is the fourth part: the relaxed granddad drumming of Nick Mason, who's finally drumming like the older man he's become, slowly patting the tom-toms and cymbals in front of him. It is that organ/synth/piano sound that is smeared out all over Pink Floyd's records, like a carpet, that unnoticed carries all on top of it, that shines here in its full glory. The endless river finally gives Rick Wright all the credits due. Where Gilmour bends to Wright. Is it a coincidence that The endless river is the best Pink Floyd album since 'The wall'? I don't think so. This is inspiration. Maybe even for as simple a reason that there were no pressures on these sessions. The original sessions were jams never meant to be released or even just Wright playing alone in an odd moment? The added, new sessions as a major surprise to unsuspecting fans, who didn't expect anything from the band any more.

The tracks are all instrumental, with one exception towards the end called 'Louder than words'. Some sound so astonishingly familiar, as if they have always been there in the past +/- 40 years.  The endless river brings the best of Pink Floyd, instrumental. Largely meandering tracks, focussing mainly on Wright's keyboard parts and Gilmour who solos over them. His best since 1979 also. And although The endless river can never replace albums that are a part of my DNA for the past 35+ years, I'm already certain that this is going to be a lasting relationship. The album ends with 'Nervana', a belated answer to the punk movement, Pink Floyd style. I think only 'In the flesh' is louder since 'One of these days'.

And so the world has a new Pink Floyd album. I easily could have lived on without it, but now it's here? I'm cherishing it and play it again and again. If this is the end for the old beast -and all points in that direction- then this is an end in style and proof that without Rick Wright at their side as co-composer/arranger/whatever you would like to call it, no other Pink Floyd member has made an album that truly counts. The endless river is simply one of the better albums released in 2014.

You can listen to 'Louder than words' here.