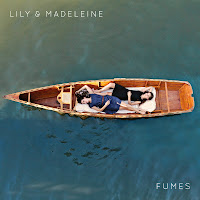 What a life. Falling asleep in a row boat and not an oar in sight. Neither is an (outboard) engine, so the sisters are escaping fumes as well. Some have it all. The cover is well chosen. As relaxed as the cover picture shows Lily & Madeleine to be, as relaxed is their music. There's no haste in the universe of this duo.

Not that Fumes does things a lot different. The title song that starts the album, starts extremely small. A bell like sound, a piano, a guitar. In the second sentence the voices of the sisters start blending and I'm sold. "Good enough", is more than good enough for me. The drum sets in very hesitantly. In a way that I really think, oh-oh, mistake, two beats later all's well again. The effect of music can be as simple as this.

Even when the tempo goes up a bit and a full band setting gets behind Lily & Madeleine, it does not change the lack of urgency in the singing. The sisters focus on finding the spot on harmonies, taking their voices up and down at exactly the right moment. Creating those little moments of vocal harmony heaven. Everything happening behind and around them is necessary to have a song, but the music is functional. It's there to make the strong points of Lily & Madeleine come out. That is the case best in the slow, ballad like songs. 'Cabin fever', one of the faster songs, is one of the weaker sisters on Fumes.

In my review of 'Lily & Madeleine' I wrote that not all was well. As if in some of the songs the girls were forced to sing again at this or that party. Not so on Fumes. The duo has grown as singers and performers. Not that there is a major party going on now, far from it. Fumes certainly sounds a little more convincing. And that is the important next step in the career of the sisters Jurkiewicz. No second album fever here.

For all those that like to dream away every once in a while with some extremely nice music in the background and those who like to listen intensely to music with a headphone on: this is your album! Just start with 'Hold on to now' and you'll know where this advice is coming from.

You can listen to 'The wolf is free' here: