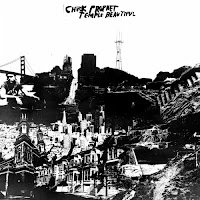 You can listen to Temple beautiful here.

Chuck Prophet is on my radar since somewhere in the mid-nineties. If I remember correctly his album 'No other love' was my introduction to his music, an album with several beautiful songs on it, but on the whole disappeared somewhere in the cobwebs of my ever expending discography. My impression of near the 20 years of following his career, is that through these years his songs seem to come more easily to him. Just a little smoother, slightly poppier than before, perhaps a slightly brighter coloured, making me remember his songs just a little easier and making me come back to them more easily.

His previous effort 'Let freedom ring' rotated in the cd tray and iPod for quite some time. (I even have a painting of the cover in my living room.) And the same goes for his new album Temple beautiful. The album is Chuckful with pop-rock songs of the highest quality. Made with love and a keen eye for detail. Every note appears in the place where it belongs, all oohs and aahhs pure ear candy and some delightful guitar solos showing, almost as an afterthought, what a great guitar player Prophet is.

In the past ten years I was lucky enough to see Prophet and band play very up close in the Q-Bus in Leiden three times. A reschedule of his tour prevented this in May last, but who knows what the future holds. Prophet is a great performer, with the songs to boot, able to create an intimate atmosphere within a wall of rock. No mean feat.

Temple beautiful gives him several live favorites for the future. Despite the fact that I do not understand that Chuck Prophet is not a stable factor in the B-class of rockstars, playing larger venues at a regular basis, at least it gives him the freedom to play what he likes and refresh his setlist with new songs. People may actually be interested in them. It's not the quality of the songs offered. On Temple beautiful Chuck Prophet is at the top of his game. Opener 'Play that song again' holds everything this album promises. Staccato guitar playing, a great, small break introducing the directly memorable, melody laden chorus, including oohs, and a slightly strange bridge section. 'Castro halloween' does the same but adds some great guitar soloing. The fun only gets bigger when the happy memories of the 'Temple beautiful' gets laden on us, with some honking horns in the background (and excitement, even for a Californian, is equal to Manchester United).

There are some dips on temple beautiful also. Towards the end there's the song 'Little girl, little boy'. Which reminds me somewhat of Nick Lowe's 198something hit 'Half a boy, half a man', but then without the fire. 'White night big city' also misses some urgency, although it has its moments. By that time Temple beautiful has already offered its share of great songs. So I'm not complaining. Next to that, Chuck Prophet's lesser songs would still shine out on albums from many a lesser artist. Prophet tops it all of with the mysteriously titled 'Emperor Norton in the last year of his life (1880)', a true ballad, with clear, Americana like guitar playing. Temple beautiful is one of the gems released in 2012 so far. If you haven't heard it yet, it may be about time that you did.

You can order Temple beautiful here