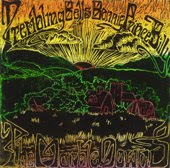 You can listen to 'I made a date (with an open vein)' here.

Ever since I've started following Will Oldham's career and I was late compared to some, he has seldom not surprised me with his new record and collaborations. In 2012 it's an album with a band called Trembling Bells, which I had never before heard of. The marble bells sort of shoots of left and right and every once in a while through the middle, but never in a straight line. The music reminds me mostly of the song 'All around my hat' of the British seventies folk band Steeleye Span.(Correction, I just read on Wikipedia that they still exist.)

The connection to British folk is not so strange, as Trembling Bells originate from the British isles, Glasgow to be exact. The links to days gone by are plentiful. From folk rock to a guitar sound Mike Oldfield would have been proud of on 'Tubular bells': "slightly distorted guitar".

Ever since I have the album in my possession, I keep playing it more and more. It started with my first surprise of hearing Oldham harmonising with the classic folk rock voice of Lavinia Blackwell. A Joan Baez light, a little Sandy Danny and the Steeleye Span lady, Maddy Prior. Followed by the very different outings in which he ventures, successfully. Not just folk. There are portions of psychedelic rock served and Bonnie 'Prince' Billy-like songs with a full band, fat drums, electric guitar, organ and bass. Nothing like his latest albums 'Wolf Roy' and "The Cairo Gang'. His singing is slightly different as it is a tat more hastened than usual and he gets away with it just fine.

The album kicks in in a very sixties way. It could be "Race with the devil' by Gun, 'The legend of Xanandu' by Dave Dee and co, before the drumming becomes fiercer, the organ pounds in, but the guitar is contained, despite being almost as distorted as the Gun song of 1969. With Lavinia almost wailing oohhs in an almost opera way. Will Oldham starts singing and the song takes really off in a folk rock vein, that sets the sphere for most of The marble downs. 'I made a date (with an open vein)' is a strong opener, that only would have been better if it had been recorded by Jefferson Airplane in 1967. The Bach like organ solo would have been missing then, so that compensates more than enough. This quality is kept up for most of the album.'Ferrari in a demolition game' sounds like the intro to the 'Blackadder' theme of the first series. Very classic rock indeed. The contrast with the rocky, up-tempo 'Ain't nothing wrong with a little longing' couldn't have been greater.

The marble downs is in every way a treat. A mix of many styles which are handled well by band and guest singer. 'Excursions into assonance' has some great variations which make it a fantastic song. 'My husband's got no courage in him' is pure folk of old. Just singing and harmonising as if a song delivered from way before recording times. And then a glass is smashed to the ground. The band burst out in 'Riding', from Oldman's The Palace Brothers days with a haunted vibrato guitar lick in there. This gives the song a tremendous sixties sound, but is not the strongest song on the record. It all ends with a Robin Gibb cover from 1970: 'Lord bless all'. So unbeknown to the artists when they recorded the song, they end with a fair tribute to the late Bee Gees singer. (Click for the In Memoriam on WoNoBloG here.) If I'm honest this song could have been skipped as far as I'm concerned, but this last miss takes nothing away from what I've already heard before.

After collaborations with Matt Sweeney ('Superwolf', 2005) and Tortoise ('The brave and the bold', 2006), here's another great collaboration by Bonnie 'Prince' Billy. It shows off his many talents in a shining way. Like well polished marble. This takes nothing away from the performance of Trembling Bells, a true revelation.

You can order The marble downs here or here
Gepost door Wo. op 10:33