Machines For Living. The Persian Leaps 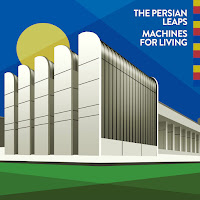 The Persian Leaps have become a common feature on WoNoBlog. The vehicle for the musical adventures of Drew Forsberg, from Minneapolis in the U.S., is spewing out mini albums by the year and somehow I've got the strong impression they keep getting better as well. As if slowly but surely Forsberg is honing his songwriting, playing and arranging skills. Machines For Living surely is an album proving my point.

This five song album is filled with sweet poprock. Some with a little sugarcoating, some with a punch or some bittersweet symphony, all instantly satisfying. The level of pop in the songs simply guarantees it. I find that each song has a few elements that make them stand out and make me want to sing along. Even if its just an oh-oh-oh I want to find another harmony to. Listening is fun and inviting.

Drew Forsberg no longer is young man. He is living his dream, so I imagine, with writing and releasing his songs. He started The Persian Leaps in 2012 as a band. During the years and most likely due to Covid, it has become his solo vehicle. As you can see, he recorded every instrument himself (and programmed the drums). No help from anyone. Except that one of the singles on the album is a cover, written by his uncle Jon Asher for his band containing Dan Fogelberg. 'Maybe Time Will Let Me Forget' was the only single The Coachmen released, in 1967. The Persian Leaps bring the song back from obscurity. It shows how many songs have been released and forgotten. I do not know whether the single made it to one of the 'Psychedelic States' compilations released in the 1990s but it probably deserved a spot there.

The album starts with 'Alright Alright'. A title befitting the song and the album's start. The guitar riff grabs the listener by the ears, shouting: 'Listen, take notice'. The mix of power and pop in the song is infectuous. Headbanging is almost an option, while singing along becomes obligatory. Two minutes and you're released already. An ultimate short pop rock song, with some great harmonies.

His uncle Jon's song is somewhat more pop but holds even better harmonies. Most likely the song is played a lot tougher than 55 years ago, the pop element without doubt still shines through. Forsberg does his uncle right.

By now you'll have gotten the picture. On Machines For Living The Persian Leaps scores on the scales of pop and rock successfully. It contains both in the right mix. Everyone can get out its favourite parts with ease. Me? I like both so get to score double with Machines For Living.

You can listen to and order Machines For Living here: