Start At The End. Tamar Berk 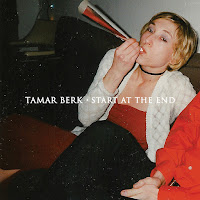 To sum up, Start At The End is not only a good album, but a great fun one as well. Tamar Berk really got the best out of herself and the people she's worked with.

Following Tamar Berk's advise, I started where I should have ended. So, let's return to the beginning. Not that long ago, I received an email asking if I wanted to listen to her album. I did and wrote a review of 'The Restless Dreams Of Youth' in early summer last year. Less than a year later Tamar Berk is back with a new album called Start At The End. If her previous album was a nice introduction, I'll admit to still playing every once in a while, the new one is a stunner.

On Start At The End Tamar Berk shows a host of sides to her musical self. From the very beginning the bittersweet pop of 'Your Permission', with its delightful piano part, sets a mood for the album that begs listening. The song easily touches the bar an independent singer-songwriter like Lauren Mann sets. A beautiful song with a few surprises along the way.

'Tragic Endings' was a single that has come by in a singles post recently. It has to be mentioned once again, as it is one of the songs that sets the standard for Start At The End. The pop-rock ranges from Veruca Salt to a Mick Taylor/The Rolling Stones style guitar solo, played by Rob Wrong. This song has it all, as it brings back everything including The Bangles and Belinda Carlisle, while rocking out in a truly sweet way.

Go on through the album and you will find that a standard has been set. A standard Tamar Berk manages to reach for successfully quite often. Whether a ballad or a rocker, you will find lines blurred here and surprises in nearly all songs. You may rightfully state that you have heard this kind of music before. There's absolutely no denying here. Neither can I deny how nice these additions to a well-known genre are. Tamar Berk simply does an awful lot of things right on her new album.

In the past few weeks I have been able to listen to Start At The End and find it so easy to return to it. The music certainly is serious but that does not exclude it being fun to listen to. This music is uplifting and all a person needs every once in a while.

If Start At The End shows anything, it is growth. The songs are better, Tamar Berk sings better, as a whole the album comes across far more self-assured. It is one of those big surprises that come with having this blog. With 99,9999% I dare to write that I would never have heard this album and because of the blog I have. It is one of those privileges coming with it. From the beautiful ballad, again with a little Stones included called 'Sweet Relief' (yes, Rob Wrong again), to the alternative rocker 'Real Bad Day', I wish everybody a real bad day like that one, it is a delight to listen to. Something far more people should be doing.

Oh, yes, I had written the ending already. You can order Start At The End on Tamar Berk's Bandcamp page: