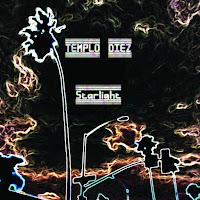 Last week Templo Diez debuted on this Blog with a single called 'Going Surfing'. The song was intriguing enough to take a step back in time and start listening to the album, 'Starlight'. The album fell through the cracks of the supply chain in the fall. Not any more.

The opening song, '305 South', is full of mystery. A guitar with some reverb on it and atmospheric sounds (from a violin?) accompany the singing. I can't help thinking about Mark Lanegan, in whatever capacity. A lonely singer overlooking an empty landscape. Until everything around him simply explodes. As if the whole landscape erupts like in science fiction movie. Giant worms racing underground towards the camera, upending loads of desert sand. '305 South' is as impressive as it is forceful.

As Templo Diez only for the first time truly gets attention on the blog, let me take the time to present the band. With Starlight the Dutch band presents its 6th album. It has been five years in the making and ends a period of private turmoil but also creativity. Lyrics to the songs can be very personal but also derive its title from two U.S. railway companies from the 19th century, "the Southern" en "the Dog", who crossed lines in Clarksdale, Mississippi. All songs are complete, short stories told in a musical setting. Singer Pascal Hallibert is of French descent but living and working in The Netherlands.

All throughout the album the Mark Lanegan connotation remains. I notice that this is not a weakness but a strength. In fact I will choose Starlight above Lanegan's latest efforts. Starlight is more experimental. The overall mood certainly is dark. There's no denying there. Fact is, Templo Diez doesn't stop there. Listen to the songs and all sort of sounds will come towards you. Whether percussion, a keyboard, an exploding guitar, all through the album these musical adornments find their way into your ears. They make listening not only a joy but also an experience. Yes, at some point I will know the album by heart, but until that day it will keep on surprising me every single listening session and perhaps even beyond that point as well.

So desert blues may be at the heart of Templo Diez' music, at the same time I can call it dark, brooding balladry. Even Pink Floyd isn't too far away ('Clear Fence'). The long, drawn out slide playing, the electric piano sound, it's all in there. Until the song explodes in the solo section. Moving further into the album another influence surfaces, The Velvet Underground. That high sounding guitar, the little bells sounds, it sounds greatly familiar, with that great voice of Hallibert sounding out over it all. Just another example how Templo Diez surprises on this album.

Starlight was overlooked until recently. I am only too glad to have encountered the single that put me on the right track. Templo Diez has released a fine album alright.

You can listen to and order Starlight here: