Save Our Hearts. Madisyn Whajne 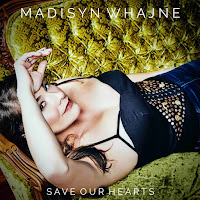 Two singles preceded this album on WoNoBlog and both received a favourable reception. It made Save Our Hearts a much anticipated album. Having taken the album out on several spins, I can declare the anticipation has been fulfilled.

On Save Our Hearts Madisyn Whajne presents an extremely nice combination of punkpop, alternative rock and girl pop. The music may be quite direct, there's always something left to dream thanks to the way Madisyn Whajne sings. This leads to a musical mix of innocence with a spike in the right places.

The album was written during a dark period in Whajne's life, with the music pointing her way towards the light. The songs led her to her debut album, that is released in a weird time, but certainly radiates light in these dark and now also winter times. Together with co-guitarist James Gray she wrote the songs, that she co-produced with Jay McBride. It results in an album that is both clear and murky. Nothing is spelled out. I can go on my own adventure and discover the riches one by one, per listening session.

Save Our Hearts is the kind of album that grips me from the very beginning. 'Summer Love' wasn't a single for nothing. It's the kind of song that demands attention. "Give me something to believe in" is the opening line. I think that request has been answered. It is not the world but Madisyn Whajne who gave herself that something. The light and the shade work itself through 'Summer Love'. The atmosphere is both light and dark, with the dreamy singing of Ms. Whajne on top. Her voice has a kind of innocence that belies her age. It's her voice and it suits her music extremely well. Although it makes me think more of girly voices of The Bangles when they broke through, than of a mature woman the singer is.

In 'Killing Desire' the band rocks out with a piano banging one note the whole time. Again that light / shade thing and rocking hard with an innocent voice trying hard to sound a little tougher. The result is a second knock out song. Killing desire song sort of failed, I'm afraid. I love listening to the song and long to hear it some more. And soon, please. 'One Shot', the next song does the trick as well.

Isn't there anything to complain about? Yes, there is. In the second half of the album the tempo goes down. Although this takes care of some variation, it does take the pace out of the album. The two songs, 'When Morning Comes' and to a lesser extent 'Never Give In', are simply not interesting enough to listen to more often. Luckily for me, the album does not fizzle out. 'Fire' rocks out again and brings back that R.E.M., Veruca Salt and The Bangles feeling once again. Madisyn Whajne has taken the torch from bands that once were, lit it and sports it with great assurance.

I am going to retract a little. When I played the album on the stereo set for the first, after writing the above, the sound opened itself, showing the warmth of the two songs mentioned before. It made me like the album even more. One more point to Ms. Whajne.

With Save Our Hearts Madisyn Whajne has made a dream come true: her first album. And it's there for all of us to enjoy.

You can listen to and order Save Our Hearts here: