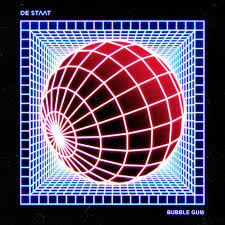 Everyone his own bubble is the theme of the fifth album of De Staat, one of the bands on this planet that mixes hard rock with hard-edged hip hop in a perfect way. With Bubble Gum De Staat is at its peak, yet stares in the face of a cul-de-sac. Can it become bigger than Bubble Gum? No, and the band hints at other solutions and even directions on Bubble Gum.

De Staat is a special band in more than a musical way. The first album was recorded by singer/guitarist Torre Florim without a band around him. L'état c'est moi. Florim was the first person who could rightfully claim this after Louis XIV. In order to perform the music he needed a band and that band, having started as a live act is still together. In fact I'm certain that the strength of De Staat is determined by the five piece band and not just by Torre Florim's ideas.

That strength grew by the album culminating in a better album by the album. Fiercer, stronger, melodically better, fatter beats and extremities. De Staat grew in popularity by the album as well and now is one of the big rock bands of The Netherlands. On 'O', the fourth album all the influences came together in a perfect blend, with even a few radio hits on the album. Yet, how to tackle that fifth album?

De Staat toured Europe with Muse and that is no real surprise. Although De Staat is a little more extreme in its music, the fact that in interviews the band states it is in the same position as Muse was some years back, is accurate. Muse had to sort of reinvent itself when it could go no higher, bigger, etc. After experimenting for two albums two great albums were released, 'Drones' (2015) and 'Simulation Theory' (2018). With Bubble Gum De Staat is where Muse was 13 years ago. Nothing is bigger than 'Knights Of Cydonia' is there?

Back to our subject, Bubble Gum.The album starts with a sound like a ship's horn calling out through the fog. There's a drum but everything else is electronics producing deep, dark beats. Trump's election and campaign is the theme of 'KITTY KITTY'. In a way De Staat is even holding back. The beat has a slight stutter, without putting it on to evidently. Where the band is branching out is on the huge synth sound (or a guitar effect to the max) in the instrumental parts. Rhythmically this is all very well done and a great opener  to Bubble Gum.

Torre Florim is not afraid to use his voice in a higher registry and he's singing here and there instead of the declamating/chanting he usually does. The auto thingy in 'Fake It Till You Make It' is in line with the title. Again the rhythm is worked out to a tee. Drummer Tim van Delft really grasps a headliner here and doesn't let go. Before this sort of rhythm is internalised the De Staat members must have been counting and counting and counting to get this right.

Listening to the first songs I realise that only a multi million dollar budget could make the sound of Bubble Gum bigger and thus better. Just listen to the stutter of 'Mona Lisa'. Of course we have heard this before, not in the least in 'Witch Doctor', melodically this is a much better song. it holds a few surprises in melody and singing. 'Mona Lisa' is anything but predictable the way it seemed to be when the song started.

The first real surprise is 'Phoenix'. An air raid siren combined with the sound of a crashing plane starts the song. I brace myself for the loudest De Staat beat ever and get a 70s ballad spiced up with modern electronics. Torre Florim is singing and singing higher. De Staat is able to write and play a song that simply flows like ballads of old. Something new for sure, with enough De Staat elements to keep hardcore fans pleased (or ought to be). 'Level Up' makes amends for those offended immediately, but again the melody is woven into the rhythm in a beautiful way. With 'Me Time' I'm transported into the stadium of my favourite football club. An extreme beat like this can all of a sudden pop up in between the familiar football tunes before the match. Familiar De Staat territory 'Me Time' is.

The duet with LUWTEN is another surprise. The female voice in a duet works really well in 'Tie Me Down'. The beats and accents again battle with melodies. Tessa Douwstra's voice is able to lead De Staat easily. Another one of the highlights on this album. It seems it is full of them. What De Staat gets better and better at is to hide small pop elements into its, at times, uncompromising music. That leads to compromise but only at the highest levels possible, that of perfect synergy. In the final surprise, 'Luther', a Bowie element is incorporated that works really well in this context.

I fully realise that this is not a record I can play anytime, anywhere. Already I can hear the comments around the house if I put this on. At the same time, when I'm alone Bubble Gum is the kind of record I want to play loud and dance across the room to on my own. After a few listening sessions I also realise that De Staat has surpassed itself again. The new elements woven into this production make it, again, more diverse and stronger. That cul-de-sac is obviously no dead end street for De Staat, just a closed roundabout leading back to the main road where many options await. Listening to Bubble Gum I know this is the scenario De Staat will follow. I am seriously contemplating to score the album the full *****.