Money Time. And They Spoke In Anthems 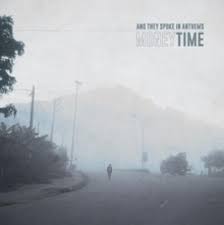 And They Spoke In Anthems is quite a name for a band. It holds more than a promise, it comes with heaps of expectations, perhaps even obligations. Something alike ...And They Will Know Us By The Trail Of The Dead. That band lived up to its name alright over the past two decades. How are things here?

Different, almost opposites. And They Spoke In Anthems is a one man band filled by Arne Leurentop. With Money Time he releases his second album after 'June'. The music is soft, yet certainly present. Meandering itself into my ears, ever so sweetly, yet fully determined. "It's me, it's me", Leurentop sings with several little high-pitches voices in the back of 'Leaving You Cold'. As if I hadn't noted and was left cold. What were you thinking?

This is the way of the music on Money Time. It creeps up slowly, touches you, affects you and is determined to never let go. Not all songs work like 'Leaving You Cold' though, the vaudeville tinged 'Message From The Future' is musically set decades into the past, from before my personal past. Think what Gregory Page is good at, with a less authentic sound to the music. At the same time it's clear 'Message From The Future' is well made. Compensation kicks in I notice.

Nostalgia is a mood that is all over Money Time. There is a paradox as Leurentop is not afraid of using modern instruments and sounds, yet gives of a feel of long gone times. I am totally okay with it though. Hear the guitars snarl in the back of the dramatically voiced violins in 'Dialogue For Pieces'. Again two worlds meet that can't in real life. What is gone is gone. Not in movies and music though and And They Spoke In Anthems uses that possibility to great effect on his album.

In everything on this album modesty is a quality that does not get in the way of the effect the album has. Arne Leurentop can afford to be modest. The soft voice, the quiet sound only draw me in ever nearer, until the album becomes all enveloping. No, Money Time is no masterpiece, but surely very well done. Convincing and powerful in its own, modest, way.

There are little surprises in most of the songs that give themselves away slowly but surely. A different background vocal, an unexpected instrument, a little turn out of nowhere. Anything is possible except strong eruptions. That already mentioned guitar is it for eruptions. The basis remains a quiet song that meanders into your ear. Take your time, let Money Time do its thing and you will find that a richness in music has enveloped you, capture you and taken you in. Money Time equals quality time, if you allow it to do so.