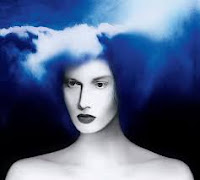 The story on the writing of this album is a bit odd, the cover somewhat disconcerting and the music said to be weird; if I was to believe the media. And that was all before I had heard a single note. Last week I bought the cd, yes, it was very neatly priced on #RSD18. So I decided to emerge myself in Boarding House Reach, to find out whether I would be confronted with a 'Metal Machine Music' or 'Kid A' kind of album or with an album that, with some stamina, would prove to be another fine solo album by Jack White.

So Jack White hired an apartment, set up gear that limited his options considerably, just like he had as a teenager and recorded the basis of the songs he wrote in the apartment. The result, after a lot of workovers, is released as Boarding House Reach.

The beginning of the album, 'Connected By Love', starts with a fairly strange noise but turns out to be a fine song in the now quite familiar Jack White style. Some rock, a little country, some alternative rock for good measure and a great organ solo. The chorus is well worked out with different voices joining White in a, near, vocal, gospel like battle. The slow down to a piano vocal is a tell-tale sign things may be different from usual.

The next song is much slower. 'Why Walk A Dog?' is a song with a totally familiar structure. It's the uncharacteristic emptiness and the slight treatment of Jack White's voice that give it a somewhat eerie atmosphere. The heavily distorted solo guitar throws in a killing sound. There's nothing much wrong with this song.

The funk comes in with 'Corporation'. It includes a Zappa circa 1973 instrumental sequence combined with 'Superstition' keyboards and dance drums. 'Corporation' is different from what we're used to. In Jack White and in general. The female vocals in "who's with me?" give the song a distinct funky, disco flavour. Sly Stone or Prince is not far away here in feel. The music is allowed to go a long way but not all out. The scream takes care of that. Overall 'Corporation' is too strange to be truly danceable. Funky, yes.

'Hypermisophoniac' is where things get weird. Strangely enough it is extremely easy to imagine a White Stripes song here. Despite the fact that there are some jazzy elements, this is a The White Stripes song laid out on a very strange bed. 'Ice Station Zebra', I faintly remember a book I may have read long ago, hip hop elements come by, as does Prince. That typical way of singing Prince could apply. The keyboards and piano also give the tune a jazzy flavour. So here is an overarching theme occurring. Jazz. Is that what makes Boarding House Reach so a-typical?

'Over And Over And Over' starts out with a cool riff on a loud guitar. Things get weird in the "over and over" part. This "chorus", end of a verse is a better description, is sang in a strange way, giving the song a strange feel. Some other weird shit takes place in the instrumental part as well. There is simply no rule in the song. Anything goes and was tried out. Probably a lot of ideas were discarded before the song took on this definite shape. It may well be the only rule for Boarding House Reach: there were no rules, except when something did not work. Just listen to 'Everything You've Ever Learned'. No one thinks up such a sequence in a song if there had been rules. 'Respect Commander' takes even more turns in the intro. Out of the chaos something may rise or fall. It comes as it goes.

By now you should have gotten the gist of this album. Only an arrivé artist can afford to come up with an experimental album like this. It seems even Jack White had doubts whether to release the album as is. He did and that takes courage. I can't say I like all I'm hearing but as a whole this certainly is a nice addition to his now three album solo career. There's no guessing what he will come up next. It seems there's a new The Raconteurs album in the making. Let's see and be patient.