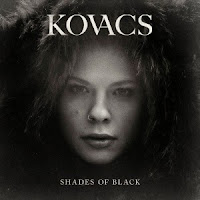 Kovacs' fame exceeded her music. Before I had heard one note I somehow knew things about her that I would not have minded not knowing. All sort of unpleasant personal stuff. Perhaps it helps to explain her music or lyrics, but still.

From what I had read about the music on Shades of Black I did not expect to listen to the album, besides giving it a first try. Was I wrong? Yes and no. Shades of Black does not contain the sort of music that I prefer to listen to. The first comparison is Caro Emerald, a sort of music I close to abhor. The second reference is Lana del Rey and then I start to prick up my ears a little. The third is all things Adele and I'm hanging somewhere in the middle, tending to lose my balance. Finally the little tray containing all things classic James Bond themes in my mind was opened. Flip, flop this album goes in my head. Yes, no, yes, no, yes, no. So it is fair to say that I'm intrigued.

Kovacs' voice is of the Adele tradition. The sort of voice that gets most singers in serious vocal trouble the moment they become truly popular. The duck quacking kind of voice I call it when I'm not politically correct. In a song like 'My Love' it is the exactly right kind of voice. Rough edges cut through the lyrics like a sawlike knife through meat, creating shards instead of cuts. She may be singing about her love, but more like a tiger that fell in love with chicken or calf. An extremely dangerous liaison it seems. '50 Shades of Black': "I can be a witch, a bitch, a murderer". Sharon Kovacs from Eindhoven seems not be a lady to touch without gloves on. What about a bomb demolition suit? The cover of the album hints at this also. It reminds me somehow of a wolf.

The just mentioned opening song and near title song holds all the qualifications mentioned. Suave is the word that comes to my mind, sophisticated another. It is here that her voice clashes with the music. The music holds all these high standards. Her voice can easily turn into a whip lashing out. The contrast is exactly what makes Shades of Black so fascinating to my ears. And I'm surprised that it is, but who cares? Music is about being entertained and Kovacs does that.

As a whole the album is too much for my taste, as this is not really for me. 'Ultraviolence' remains the exception here. Dan Auerbach seems like a logical explanation. By listening a few songs at a time that problem is solved. 'Night of the Nights' is a song that I enjoy to listen to in those sessions. Mysterious, dark. Not going anywhere, but fascinating none the same. The muted trumpet in 'Wolf in Cheap Clothes' gives the song an even more distinctive jazzy sound. This song comes very close to Caro Emerald's sound. And I like it in the end. It has the right mood, a little Nighthawks at the Diner kind of sleaze with loads of cigarettes and late night Bourbons.

Oscar Holleman, who worked with nearly all things metal in The Netherlands, produced Shades of Black and must have known he was on to something right from the very start. He caught a vibe that makes all the right things come out in this jazzy pop album. He allows Kovacs to shine as the star of her own album. A clean sound and several pleasant surprises, hand claps, finger snaps, clear pianos, horns and intriguing rhythms. Holleman made sure the production shines as well.

The gem of this album is 'Diggin'. There's even some strings involved in the James Bond theme song without a movie. If someone has the right connections Kovacs and Holleman may be the duo responsible for the Bond movie theme for 2018 or 2019. Whatever Adele is up to these days, in Shades of Black she may just have found her match. The only question is whether Sharon Kovacs' voice will hold up. Most singers who sing like this run into trouble fast after they made it. Time will tell. In the meantime I'm playing 'Fool Like You' again.

You can listen to 'Diggin' here: