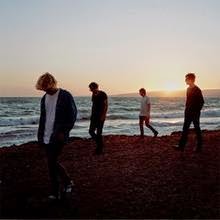 The Charlatans is a band that is around for over 25 years in 2015. A band that has known ups and downs and lost band members in ways that are not for every band. I had lost sight of them after 'Up To Their Hips', to regain attention in the mid 00s with the fantastic album 'You Cross My Path'. During the tour of that album I saw the band live in The Hague, where I wanted to see Joan as Policewoman and Supergrass. The Charlatans won easily the evening, if there had been prizes to give away that is.

To my surprise there has been an album in 2010, 'Who We Touch', which I appear to have missed. After this release things went quite for 5 years. The band lost its drummer due to a brain tumor and decided not to replace him for this album. As a four piece the band continues: Tim Burgess (vocals); original member Mark Blunt on bass; long time member Marc Collins on things guitar and keyboardist Tony Rogers, who replaced Rob Collins in 1997.

From a Dutch perspective The Charlatans is a typical UK band. Big over the smaller pond, nearly unknown here. There was a hit in the early 90s somewhere, but that is about it. The other perspective is that the band broke just before Britpop became a moniker in vogue. And still up and running.

Modern Nature is an extremely clear sounding record. Self-produced together with Jim Spencer, with credits to his name like New Order and Liam Gallagher, to name a few. The spacious mix makes it extremely pleasant to listen to with the head set on. Musically Modern Nature is unhasting itself. The dance rhythms and the rock fuelled, dancy rock songs are missing here. Modern Nature is an album for middle aged people who still like to listen to their bands of old. This isn't as bland as it may sound. The Charlatans shows with its latest record, that its position right behind the great bands of its hey day is still fully deserved. The urgency has been replaced by a mellowness that is extremely pleasing. At the right time of the day. It is at those moments that the broadly rolling keyboards and the arpeggiated guitars do their work in all the right ways.

Over all that Tim Burgess sings in a relaxed way, swaying me into relaxation. Beneath this all the beat may still be quiet busy, it is so that it augments the relaxed atmosphere. Listen to a song like 'Emilie' and you'll find out just what I mean. The Charlatans seems to have have found the best of both worlds (again). In a song like 'Let the Good Times Be Never Ending' a few rightly placed effects lift the song up in a great way. Backing ladies vocals, some horns and finally a warm lead organ with a 60s feel and all feels totally different. The band manages a few tricks like this on the album, making Modern Nature more attractive by the spin.

Although this usually has a negative connotation, Modern Nature shows that The Charlatans is grower older in an extremely graceful way. A song like 'I Need To Know' has this great sense of urgency, without any rolling of muscles. The organ/mellotron sounding gives the song a great 60s feel, while the power drives the song onwards, while Burgess keeps his cool. It is a song like this that I know that Modern Nature and I are going to be just fine. The downside is that I have to really listen. The album doesn't work being played in the background. For that it is too modest, certainly in the first half. The brakes slowly come off in the second half. The rockbeast is still hiding in their somewhere, which is just fine. The conclusion simply can be that The Charlatans may just take a turn in another direction come 2016 or onwards when starting contemplating record #13.

You can listen to 'So oh' here: