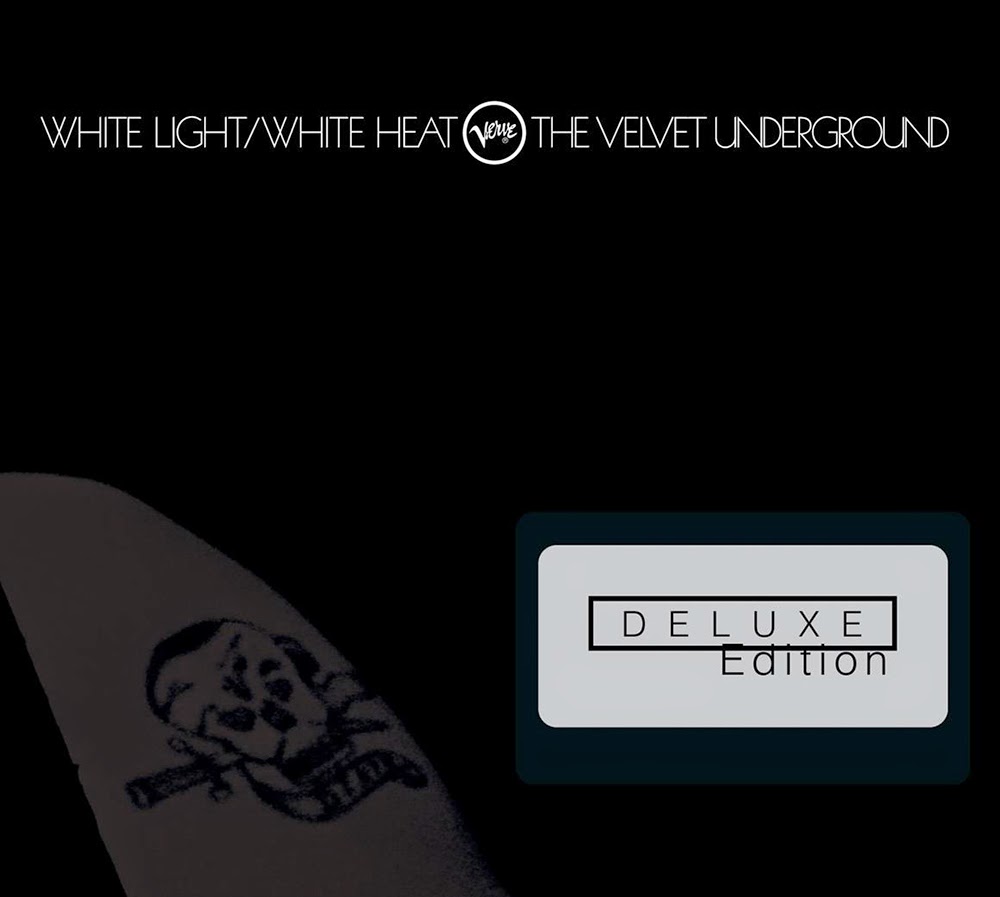 Recently I wrote something about the relentless pounding of 'Sister Ray', the 15 minute plus song that I was never able to sit through even once. Then I remembered that I had come across this 45 years anniversary 3 disc edition. And guess what, I sat through 'Sister Ray' several times. What goes on?

White light/White heat was originally released as an LP in 1968 and was the second album of The Velvet Underground, the first without Nico and the last in the classic line up with John Cale on keyboards/bass/viola and of course vocals. It was the first album after the band had withdrawn itself from Andy Warhol's entourage and was on its own. The six songs that it unleashed on the, now no longer totally unsuspecting, world were of the same bizarre mix of rock, (warped) ballads and garage punk psychedelic experiments, that have never really been rivalled in the decades to come. They were exactly in line of that which made The Velvet Underground so legendary and revered right up to 2014. Something unparalleled at the time was released on 30 January 1968. An album that stands upright 46 years down the line. With the mention that I bought the LP version somewhere in the mid-80s and that I appreciate the band a lot more than 30 years ago, it is time to start and take the first cd of the set apart by the song.

The album kicks off with the relentless pounding of pre-punkrock song 'White light/White heat'. This classic rock song is one of the classics The Velvet Underground produced in its short life span. It may be for the first time that I'm listening to the song on a headphone. Lo and behold! Behind the pounding there is this subtlety going on that surprised me so much. Listen to the little leads the guitar is playing somewhere behind in my right ear. The almost boogie piano part was always clear of course, but stands out some more, adding to the experience and quality of 'White light/white heat'. It gives a playful quality to a song that for the rest is relentless, in text, subject and music.

'The gift' is something that is not really meant to listen to more than once, but the story is fantastic. The choice of wording is just as fantastic. (Ever heard the great joke 'ahhhh' by the other three members?) Verbally this song is great, while the band does its thing in the background or better in my right ear while John Cale tells his tale in my left. On cd 2 the two are split to expand on the experience. The story gets even better.

'Lady Godiva's operation' is sung by Cale and is a mix of a song on Lady Godiva that switches to an operation room in full swing, in which Reed chimes in with a ghastly voice, while the song slowly derails in a serious way. From an almost pastoral scene to a horror story within minutes. There is no bounds to The Velvet Underground's execution of a song.

'Here she comes now' is the ballad side of Lou Reed again. Even more than 'Lady Godiva's operation' it is an attempt to top 'Sunday morning', which doesn't succeed, but is a good enough attempt. The little lead guitar lines and the, mixed away deeply, violin add enough to the song to make it stand out.

Enough peace and quiet. 'I heard here call my name' rocks out again. The distorted guitar underscores everything rocking out stands for, while Mo Tucker is pounding her drumkit in the characteristic Velvets way. Such a great and perhaps under-appreciated part of the band. All skins and hardly any copper. Without her, the band would never have sounded like this. Also the somewhat amateurishly sounding background vocals are doing their thing again. Morrison and Cale always sound good together.

Then the pièce de résistance. I've listened to it in it's entirety. Let's suffice with that. There's more to the song than I've ever expected. Even more details. Oh, I'm starting writing more any way. Do you mind? Could it be that the mix is better and I hear more? 'Sister Ray' is another 'Waiting for my man' but then so much longer, wilder and noisier. More explicit.. And oh so dirty, recorded, played, mixed, with speakers louder than the mikes of the day could capture. No honour for producer Tom Wilson to gain here. Except that we can still listen to the album of course.

After White light/White heat was released John Cale left the band. His role on this album is musically smaller as the viola is always in the background. At the same time the experimentation on the album is a result of his influence and he has two solo slots vocally. It is hard to tell what really happened on the basis of this last The Velvet Underground album with John Cale. What is clear, is that his influence on the music was much larger than than of Sterling Morrison and Maureen Tucker.

The first cd of this deluxe set is extended with songs that could be found for the first time on the great mid-80s album V.U. (1985), the best V.U. album if you ask me and on 'Another view' (1986). 'Stephanie says' officially surfaced on Lou Reed's third solo album 'Berlin'. He had a pool of left over Velvets' songs that would surface until 1978. Some others never did until the reissues and I just wonder why. Especially 'Beginning to see the light' is a fantastic song. One of the best the band ever made and just discarded for 18 years before released on 'V.U.'. The take on this album though is not the magically good one from 'V.U.' The bonus tracks attest two main things. One, that they all are more poppier than the ones released on White light/White heat and may explain part of the parting of Reed and Cale, if we set larger and large ego aside and Nico. Two, that some of these songs are really good and show what this band was capable of and might have gone if a few different choices had been made. The third conclusion is that The Velvet Underground would never have been as legendary if it had released these songs instead. Like what the MC5 did after releasing 'Kick out the jams'.

Album 2 offers different mixes and the third a live set from the Gymnasium in NYC on our then Queens' Day in 1967. The extras do not mean too much to me, but the first album made me re-appreciate White light/White heat totally, although the problem of this album in the long run remains 'The gift' and 'Sister Ray'. But a cd/MP3 takes that problem away doesn't it? In other words, great record!

You can listen to 'White light/White heat' here.