Then play on. Fleetwood Mac 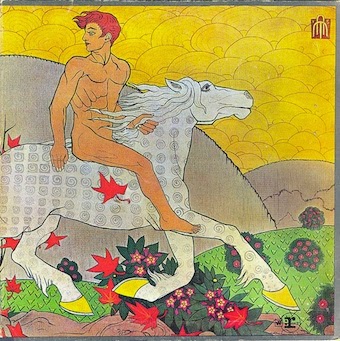 In 2014 we ran a series on albums released by bands that Wo. heard singles of on Radio Veronica as a boy, but never (or almost never) got around to listening to the album. Fleetwood Mac is one of these bands that scored hits like 'Need your love so bad', 'Albatross' and especially 'Oh, well, part 1'. The album the band, which actually announced a new album for 2015, released in 1969, Then play on, is on review today. It follows e.g. Barry Ryan, Blood, Sweat & Tears and Joe Cocker.

Reviewing Then play on is not an easy thing. Reading Wikipedia on the album shows that there are five versions of this album: the original U.K. LP release; two U.S. versions of which one has 'Oh, well' added and dropped two Danny Kirwan songs; the first cd release and; finally the 2013 re-release on Rhino Records, with a few more goodies on it. As that is the version that's in my possession, let's stick to that. Besides, without making a comparative study of it, I think this version has the original order of the U.K. album plus 'Oh, well', 'The green manalishi' and finally a bonus track. The U.K. album sequence will most likely have been the one released over here in NL in 1969 also.

The first thing I notice reading the sleeve notes is how large the influence of Danny Kirwan was on this album. This incarnation of Fleetwood Mac is as much his as it is Peter Green's. Seven and a half of the songs are his. With one jam credited to Mick Fleetwood and one to John McVie. Green is attributed with eight and a half songs, including all the (hit)singles. This last fact sheds some extra light on why it is always "Peter Green's Fleetwood Mac" when it is mentioned. A band that does not exist any more since 1970, despite the band that is undertaking another world tour in 2014-15 under the same name. Beyond 'Oh, well, part 1, not a song will be played, I guess. As a final fact, Jeremy Spencer is largely missing on Then play on, except for a small piano contribution on 'Oh, well, part 2'.

Then play on is a moody album. The sound is subdued and serious. Clearly a step away from the blues band the band was before. A band in transition? We will never know as all main players on this album had left the band within a year from its release in 1969. People in their early twenties that lost their way in life and hence lost a chance at a lasting career in music. Others took over and after a bunch of anonymous albums 'Fleetwood Mac' was released and became a major hit in the U.S.

Then play on, did not fair that well in 1969 - 1970. This may have been fitting also. With the hindsight of 45 years I can state that I do not think the album is exceptionally good. It is alright, but much better albums were released around that time. Considering that all the singles the band released during this incarnation are not on the original release, 'Rattlesnake shake' was released sometime later if I remember correctly', it's harder to take an instant shining to it.

The first time I really prick up my ears is with the up tempo bluesrocker 'One sunny day'. A close to rip off song, but fun and with some of that signature Peter Green thin lead notes in there, that make the song stand out. 'Although the sun is shining' is a song by Kirwan that has nothing to do with blues. Something like an English serious vaudeville song. Nothing someone like me would ever associate or recognise as Fleetwood Mac mark I. I just can't make up my mind whether I like it or not. It's just so different.

With 'Rattlesnake shake' Peter Green sets the album back on track. An eerie blues, a blues turned inside out. Darkness is another good description for it. Green was looking at the blackest recesses of his brain or soul, perhaps even both, when he came up with a song like this. That much is sure. The kind of song that I expect and want to hear when thinking about this version of Fleetwood Mac. Things would get much blacker though.

Another song I expect to hear is a slow blues like 'Without you'. Another Kirwan song. Here he grabbed the Fleetwood Mac blues mood perfectly. The same goes for 'My dream' to be honest here. There is some fine guitar playing on this instrumental. The lead sound is almost Hawaiian. So light in sound, a trademark of this Fleetwood Mac. Strangely enough Then play on becomes stronger by the song, where on most albums it's the other way around. The original album moves towards the end with Danny Kirwan's 'Like crying'. A kind of blues Eric Clapton would copy for over 30 years in playing and singing style. It did end with 'Before the beginning', a beautiful Peter Green ballad.

From that moment onwards the fun really starts. One of the greatest (blues)rock tracks ever sprays itself in full force over the listener. 'Oh, well, part 1', is such a great song. Due to the several riffs in there. The silences that contrast so hard with the riffing. The solo singing, with only a cymbal or cowbell sound and at that extremely sparingly used. After that the major switch to the acoustic part, sounding so simple, yet so effective. A flute, a few notes on an electric guitar. Beauty, magic, chills down a spine. One of the strangest #1 hits I know to date. Strange, yet monumental. Part 2 adds some more instruments, but is a continuation of the second half of part 1, including a cello. Cynically listened to, Part 2 is nothing but a meagre exercise in Spanish classical playing of a beginner. Those with more patience hear things change during Part 2. Brilliance is on display again in the chord changes and acoustic guitar interlude. 'Oh well, part 1 & 2' are another example that anything was possible in these years. Total artistic freedom released by major record companies. This window of opportunity would close again all to soon.

The next singles is the darkest Peter Green wrote for Fleetwood Mac. 'The green manalishi (with the two pronged crown)' is a LSD infused nightmare. One of his best songs though. 'The green manalishi' is 100% haunted, scary and totally brilliant. With its weird, eastern sounding guitar eruptions. The driving guitar, muted and dark. All but pretty, sexy and poppy. 'The green manalishi' was a very unlikely top 10 hit, but one none the same. Enough people recognised brilliance in the face of it. No matter how dark and scary. Peter Green went of his rocker with this song, never to really return.

Then play on ends with a Green/Kirwan song called 'World in harmony'. Another instrumental where the two found each other in this peaceful piece of music, that deserved a text at some point in time. The contrast with the creepy manalishi right before it is huge. Not all seemed lost. Another very good instrumental by the way and a befitting end the band called Fleetwood Mac in the first half of 1970.

It remains a mystery forever where this Fleetwood Mac could have evolved into. Blues was definitely on the way out after 1969. The band would have gone into obscurity slowly if it had not found other ways to express itself. Next to that it's clear that there were two captains on the ship. One remaining in bluesrock idiom, Green, the other exploring other avenues. Kirwan. Fact is that both were gone soon after releasing 'The green manalishi' in May 1970, leaving the band without main songwriters. What happened after is history.

Then play on is a strange mix of songs that do not all convince, but does show a band in transition with some very interesting results. The 2013 edition includes the hits of late 1969 and 1970 making it a much stronger album as a whole.

You can listen to 'Rattlesnake shake' here: