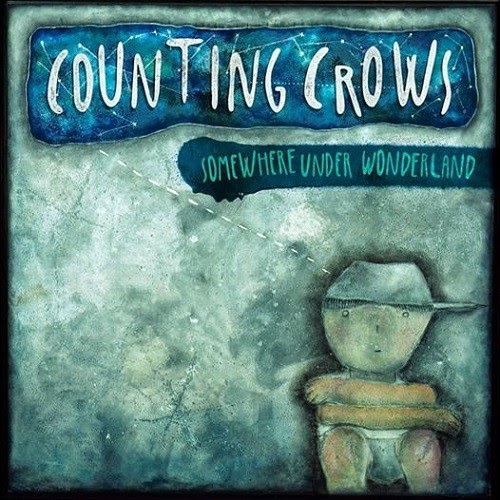 Another band that somehow is around for more than 20 years. Like for a lot of people, Counting Crows came into my life with the 50% brilliant 'August & everything after'. The Van Morrison comparisons were all over the place because of the "la la la la " intro the 'Mr. Jones', a song that referenced 'Ballad of a thin man' a bit more in my opinion. Now Somewhere under wonderland. On this album Counting Crows is a lot more consistent and rocks out every once in a while as well.

Not that a lot new is going on on this album. Somewhere under wonderland is an album that is placing things on the safe side of all things music. It's the quality that sets it apart. 'Elvis went to Hollywood' is a raucous rocker as far as Counting Crows goes and has this delicious organ. This simple sound, old fashioned, not of 2014 makes the song sort of perfect. That little extra making it shine. I just love it when something as simple as a few notes makes a song stand out. The next song, 'Cover up the sun', is a country influenced up tempo song. With Adam Carroll elements and a typical The Beatles harmony tucked away at one point. Exactly once and it is spot on. A lot of effort must have gone into the details of the recording and it clearly pays off.

The album kicks off completely a-typical. A muted trumpet is blowing (Chris Watson) a jazzy melody with just a piano accompanying it. At 1.17 minutes the piano takes over in a decisive way before Adam Durwitz starts singing. A-typical also because Chris Watson is not a band member and introduces the whole album for over a minute. 'Pallisades Park', the intro song, is a long song with many turns and twists, in which many names are dropped along the storyline. A song that begs attention a drew me straight into Somewhere under wonderland.

Counting Crows is a band that I will never mention as one of my favourites. A band that I would never want to go and see live, never even contemplated it. At the same time I somehow have several of the band's albums in the home in one form or another, albums that I always forget to play. How old is 'Hard candy'? 11 Years, 8? I don't know, but I think I haven't heard an album since and missed everything in between. Listening to Somewhere under wonderland I wonder again why this is? I just don't know. Perhaps that the band is to "faceless" for me? I just don't know.

Somewhere under wonderland is an urgent album, for Counting Crows that is. 'Dislocation' rocks in a pleasant way. A typical American rocker, with some slight Keith Richards' kind of guitar playing. The kind of rocker that I usually shy away from. Counting Crows gives the genre this twist, of which one part is the typical voice of Adam Durwitz, that make it interesting. Again there is an endless stream of words coming from Durwitz, a latter day Dylan. As an afterthought the modern world goes under in 'Dislocation'. No more London or L.A.

Counting Crows is not afraid of tossing the listener around a bit. The next song is the acoustic guitar driven singer-songwriter song 'God of ocean sides'. Driving through Dixie, Durwitz and co take us further on this musical ride through the marvel called Somewhere under wonderland, leaving me wondering, again, why I do not consider Counting Crows as one of my (many) favourite bands? 'Scarecrow' is another rocker, but for some reason or another the song reminds me of bluegrass/americana/acoustic punkers The Hackensaw Boys. I know this doesn't make a lot of sense, but 'Scarecrow' just does. But then the whole psychedelic interlude is The Beatles the whole way. 'Scarecrow' again takes me from left to right and back upside down.

Not even halfway into the album I have undergone so many musical sensations that overload is hiding in the fringes. The intro to 'Elvis went to Hollywood' and the upbeat rhythm saves the day here. Adam Durwitz even manages to get that wine out of voice. He's really rocking out. 'Elvis went to Hollywood' may sound simple, but has it all. Forceful, a great melody and fiery guitar solos. Everything that I do not associate with Counting Crows. Neither is a real country song, 'Cover up the sun'. Again we are driving from something towards somewhere. Meeting people along the road. Slowly I'm getting the idea that I'm listening to a musical roadtrip. The Beatles? They are still with us in harmonies.

Counting Crows keeps up this level right up to the end. There are only 9 songs on the album, but the band put everything it's got into Somewhere over wonderland and came out a winner. To me this is one of the better albuns I've heard so far this year (and will probably forget about again).

You can listen to 'Pallisades Park' here: