Between these walls. Mieke van Veen 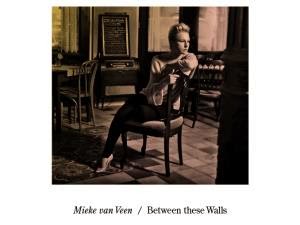 Mieke van Veen made quite an impression on me at a singer-songwriter event in The Hague this spring. It was also a very good example of how eyes can deceive (http://wonomagazine.blogspot.nl/2014/04/the-secret-singer-songwriter-sessions.html). A humbling lesson in always keeping an open ear. It made me quite curious how her cd, which she announced the release on stage that night, would sound like. Well, I have found out, so let's report on it here.

Mieke van Veen is a singer-songwriter from Rotterdam and is active since 2010. She released an EP, 'Mica's mess' in 2011. Van Veen, sister of Anouk's former songwriting partner Bart van Veen, worked with producer Budy Mokoginta on her first full length album that was released in October this year. The music is on the edge of music where pop, Americana, rock, singer-songwriter and some jazz meet.

The difference with her small sized show in The Hague last spring is in sharp contrast with the sound on Between these walls. A full band accompanies her and a string section was not exactly avoided. Luckily this full sized sound does not get in the way of Mieke van Veen herself. In fact, the lush arrangement of 'Sweet precious cool' is a triumph in song and playing. Never overdoing it, while Mieke's voice hovers over the music, picking up every wave and riding it out like an experienced surfer can. With the difference that her vocal melody is the defining role in the song. Master and commander in one.

A song on Between these walls can take many a direction. The title song is a polite rocker with a clear message to a lover. Other songs have more of a pop element, driven by an acoustic guitar, warmed up by an organ. Another option is the kind of song where you can imagine Mieke playing the song to herself at home just by ignoring the light instrumentation around her. As a singer she convinces in all genres. She does her thing: sing. The instrumentation is there for her. To make Mieke van Veen shine.

Another song I like a lot is 'Riverside'. This slow song feels like it is being dragged along, as if it is too slow to keep up. The violin solo is underscoring this feeling even some more, making the feeling double. And still the song totally works. The created effect is near brilliant. In several songs there is a fierce slide guitar, that contrasts sharply with her kind, slightly melancholy sounding voice. Another element that makes several songs on Between these walls extremely attractive to listen to. In 'Six stones' this combination works best, especially with the backing vocals in place as well.

If there is any critique on the album then it is that I can't make a choice which side of Mieke van Veen I like best. She totally holds her own in the more singer-songwriting song 'Low' as in the rockers or the outside category songs like 'Riverside'. The old rocker in me is pleased best with 'Six stones', but that is not the whole story to this album. It is the combination that works very well.

With a real piano ballad the album goes towards it end. Another side to Mieke van Veen. Finally she ends the album with a Dutch song called 'Lege handen'. It would surprise me if "empty hands" is what she'll end up with after releasing an album like this.

In my review this May I wrote that I hoped that the album would make Mieke van Veen shine. If anything that is what Between these walls does. All her strengths are brought to the fore. Between these walls is a debut album that Mieke van Veen can be very proud of. It ought to be only a matter of time before she is on tv in 'De wereld draait door' or on national radio. Picking out the right single is a very important choice here. As far as I'm concerned all is in place for a next, huge step. Sunday 16 November Mieke van Veen plays in Leiden, Theater Scheltema, I guess I will be there.

You can order the cd on Mieke van Veen's website:

You can listen to 'Riverside' here: