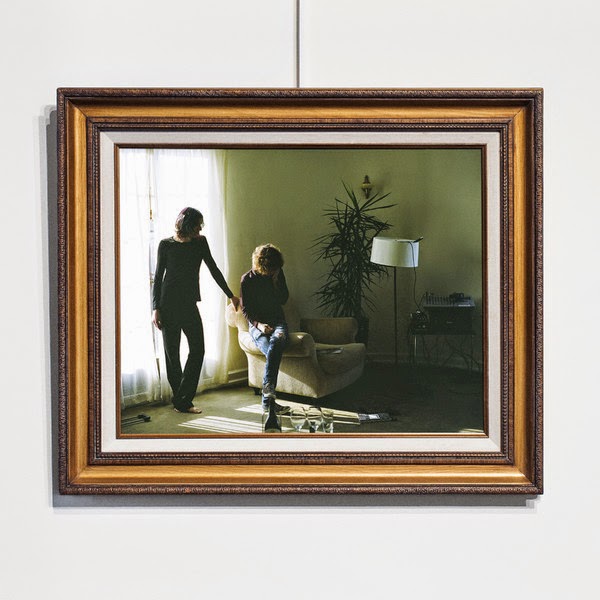 Last year Foxygen released that album with the very long name (http://wonomagazine.blogspot.nl/2013/02/we-are-21st-century-ambassadors-of.html). An album that led the plethora of 21st century, 2013, hippy influenced neo-psychedelic music. The movement sort of came and went and so seemed Foxygen as I seem to remember that the band broke up. Crashed under the weight of its own success. It seems that we have to take all that with a grain of salt. Foygen is back with an album with a short title, although the ... starting the title could mean anything, but with a whole truck load of music. 24 Songs in all and a hodgepodge of songs it is Foxygen presents the world with.

There is one album that comes to mind that compares really, 'We're only in it for the money' that cut and paste piece of unlistenable brilliance/madness. You choose. For me it is a very fine balance between the two, but at times extremely hard to listen to. Foxygen has a totally different approach. ... And star power has brilliant things on it and loads of madness. What the duo hasn't forgotten that a song needs a song (structure) and that an experiment needs experiments.

Jonathan Rado and Sam France all but broke up. They returned with a statement of creativity, abundance and cocksure pop under a layer of sticky sweetness that conceals a lot of the underlying murky dark recesses. At first listen many songs have an upbeat sound, on second and third listen other moods come forward also, taking a lot away from the upbeat rhythms of happy sounding organ notes. Things go on that are not obvious at the start.

So far I've read two sort of reviews. One saying too much, one album would have been enough. Two declaring utter brilliance. At this point in time I am still somewhere halfway between the two. There is so much to take in that it is impossible to score between the two after just a few listens. The fact that I am in between, already says a lot. ...And star power is a brazen step forward by a band that is hell bound not to repeat itself, while at the same time gives it its all. Death or gladioli. Foxygen has dared to jump the bungy and lived to tell.

For everyone who bites through the first piece of a slight case of insanity called 'Star power airlines' is treated to the pop of 'How could you really' with its slight poppiness in the vain of Air and Typical Tropical 1975's hit 'Barbados'. The organ and piano fighting for dominance and a pretty guitar and some horn playing the lead notes in the song. The unbearable lightness of being is on display here. "If you love me, don't treat me so mean" in combination with "coconut winds" to wake up in. Things are not well in Foxygen's realm. This hint of sadness remains hanging over most of the album. A sense of goodbyes to what was or could have been.

The two poppy but sad songs are rudely interrupted by the intro of 'Cosmic vibrations' that is followed by weird, deep-voiced singing, after which the voice goes back up to Sam French's normal highish voice and back to darkness. The music is good, the singing, well let's call it distracting. This switching and  this dark veil hanging over most songs, make ...And star power a lot less easy to grasp and instantly like as '21st Centrury ambassadors ...' did. For that there are too many strange and weird things going on. Songs that seem to be going in one direction are taken apart half way, instruments or rhythms are stripped, taken away, put in another sequence, making me ask myself 'what am I listening to?' E.g. the staccato guitar of Lou Reed/Sterling Morrison, soft 70s pop singing, psychedelic experiments and Ray Conniff Singers like singing. It is all there and more, much more.

Listening to this long album all in one row another comparison with Frank Zappa & the Mothers of Invention pushes itself upon me: 'Freak out'. With its set of brilliant rock and doo wop songs on the first LP and all the madness of 'Suzy Creamcheese' on the second LP. That is what is going on here on ...And star power as well. Not for consummation, only to look at. The division is well made as these songs can simply be ignored if so wished. What is most clear to me is that someone has discovered Frank Zappa's mid-sixties work and went out to play with this heritage. It's a bold step but someone has to do it.

It makes that it is impossible to decide on ...And star power in a true and honest way. There's too much to digest. There's only one thing to it: You have to try this on your own. I wish you all the pleasure in the world, as this is one big adventure to dive off of. Much fun!

You can listen to 'How can you really' here: