A new nature. Esben and the Witch 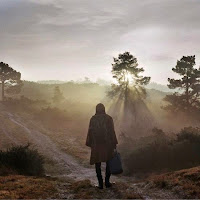 To my surprise I noticed that Esben and the Witch are playing Q-Bus, Leiden later this week. Having heard A new nature a few times I thought: 'not exactly a band that I'd expect to play at that venue'. Certainly a reason to move myself over there coming Friday evening and see what this 80s doom and gloom, post new wave influenced folk band has offer. Also a reason to write a review of A new nature before that day. So I sat myself to the task.

A new nature is a dark album, with several long and moody songs. This starts with the cover art. It suggests a medieval traveller, a long way from home with not an inkling how far to go. The sun setting or rising? Is the dark clad traveller just started for the day or does he still have hope to reach his destination before complete darkness sets in? With all dangers arising with it? Mystery, questions, suspense; it's intriguing. That is exactly what A new nature offers. (The mysterious cover is somewhat explained in the video, to which you find the link below.)

Esben and the Witch is a trio from England, Brighton, and is around since 2008. A new nature is the band's third album. Rachel Davies (vocals, bass, percussion), Thomas Fisher (guitar), and Daniel Copeman (drums, electronics) make up the trio of which Davies draws the most attention for the simple reason that she sings. Something that surprised me, reading up on the album, was that Steve Albini produced A new nature. Mister strip-away-anything-extra Albini. In hindsight it's not so strange though, as most is stripped away. What is left, is an enormous dichotomy between the extreme silences and the bombastic sound into which Esben and the Witch can burst loose. A sound that reminds me of prog rock. For a few reasons. The build up of songs, the mystical, the lenght of songs. Several songs are long, even 10 minutes plus, but the form of presentation is simple: (distorted) guitar and/or bass and drums. The extras are Rachel Davies' voice and this lone trumpet that pops up every once in a while. That is about it. This combination makes for some kind of alternative rock, combined with hints at folk and prog.

There's more to story as there are these lines that go straight back to circa 1980 when punk had died and a whole section of new wave had moved with Joy Division into a darker form of new wave, awaiting the end of the world as we knew it or even total annihilation by the atomic bomb. Rachel Davies' form of singing brings back memories of Souixsie Sioux (not my favourite) and Hazel O'Connor. The music brings back a lot of bands that I do not care much for remembering mostly. I usually was quite finished with them three songs into the album. Some The Cure as well. (Four to five songs.)

All this went into the Esben and the Witch blender and out comes A new nature. In other words more than enough is going on to keep the average music fan busy for a while analysing all that is going on and above all enjoy what's going on. With that trumpet, played by Sam Barton, as icing on the cake: the doom is final and ending all. A new 'Last post' for the post new wave 2014 masses.

It's not that I'm totally running away with A new nature. There are several hints at brilliance on the album. Just listen to the mystical intro of 'Wooden star'. The lone sounding guitar, as if calling out over the empty, muddied fields of the cover. Next to these moments, there are other moments that invite me to dose off to. Those haven't kept me from listening to this album. The fun thing is at the very moment I'm in fear of dosing off, a song like 'Blood teachings' just explodes all over the place. Believe me, I'm right back on track with Esben and the Witch.

What I heard certainly invites me to go and have a look at the Q-Bus on Friday. How does this music and the dynamics between the songs and within the songs translate to the stage? I'm very curious to learn.

You can listen to 'Dig your fingers in' here: