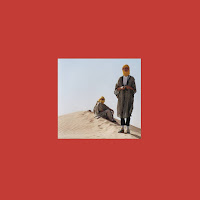 What a daft title, what a daft band name! It totally shies one away from the content if the band goes on like this. It sounds more like the English version of the new Mannenkoor Karrenspoor album than the serious alternative rock that holds itself up underneath the, granted, in-style cover.

The music on Bawredom is serious business. It is not like The Baseballs doing some covers by Robbie Williams or whoever. That is the reason the joke name irks me a little. It takes away from the music on offer. With members coming from a band with a name like Amish Winehouse, I'm about ready to believe anything. Bawrence of Aralia is from Maastricht is the southern most tip of The Netherlands and part of a lively scene of bands that are all new to me. There's so much to discover.

The story of that music starts with pointing to the erratic background that mixes with a Midlake tranquillity. Two opposites that mix quite well as both are able to do their thing without hindering the other. So behold the fast paced drumming and the slow singing. The latter is always the point of rest in a potential turmoil. At times nearly as if the singer lost his way and sang his parts in the wrong studio and somehow managed to fit in such a great way, all decided to leave things as they were.

The music on Bawredom never, ever takes the easy way out. Rhythms can be complex, an over and over repeated guitar riff, is swamped by synth sounds from the 80s. Over this all a voice hovers, always soft, but never with a melody the average music lover will sing along to in any easy way. The voice very much likens itself to Eric Pulido's. Another likeness is to that of I Am Oak's Thijs Kuijken. Soft, sometimes even vague and non-distinctive. Floating on a rough sea. Taking on the waves with ease and confidence.

And waves there are on Bawredom. This is not an album easy to digest, yet, for those who are not afraid for some adventure the album sure has some fine moments. Moments in which the music can almost turn jazzy, without losing a firm vibe or its firm rhythm. With musicians not afraid to show their proficiency on their respective instruments.

This combination makes the music on Bawredom in a way timeless. The 70s atmosphere is offset by the modern sounding guitars and the beat that could only be found in (far) more complex forms in jazz rock with drummers like Bill Brufford and Billy Cobham. Still, the idea of Yes, Jon Anderson, and Moody Blues comes by every once in while as well. Bawrence of Aralia mixes these influences into a late 10s album. No, it is not an album I can listen to any time, any day, but certainly has proven to have its moments. A song like 'Overstrung' is beautifully worked out, yet all of a sudden over.

This is a feature that surprises me every time I play Bawredom. The album is over before I know it. Every single time. Only 8 songs long makes a fairly short album in this case, with songs just ending at seemingly surprising moments. In short, Bawredom holds several surprises that make it worth while exploring. There's enough to discover for all. And the album is to the point. No spreading out songs over 8 minutes or more like some of the references in this review used to do.

You can listen to and buy Bawredom here: