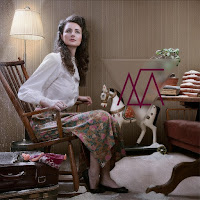 Elenne May and titles of the EPs. With number two's release in sight I can't help wondering whether after the release of the third EP it will be possible to construe three titles that make just a little more sense. 'Sheep For Fibre'? 'Stairs Raise Children'? I fell off the stairs once in a while as a kid, I climbed stairs hand and feet as fast as possible (so was raised?) and jumped down stairs of the highest stair I dared and what if one of my friends dared me one higher by doing so himself? A friend's 14 year old brother's jump almost the whole way down and his 18 year old brother climbing into their appartment's window from the outside left us 8 year olds all behind in awe.

Back to music. Elenne May entered my life with an email in December last year. I was surprised by that beautiful EP called 'Sheep For Fibre' and now the second EP is here. Elenne May created a high level of expectation with its five song EP. Rest assured, expectations are met.

The music on Stairs Raise Children in part shows another side to Elenne May. The mood is even more mystical and the pace seems slower. Is the difference created by the absence of the piano? It seems to be the case. The listener is forced to undergo the mood and is invited to step in. This happens in the very first song, 'Horses And Barbed Wire'. The song is short, under 2"10, but seems to stop, at least I had that impression for a flash of a second, about 20 seconds earlier. What follows is an "ooo" vocal by singer Elenne Klok and a slow, but faster played guitar motif by Roeland Scherff. The result is that I'm pulled into another world, where I felt firmly excluded in the first 1"45. A world where a combination of ambient, indie and dreampop prevail.

No matter how quiet and down to basics 'Housewife In The Desert' is, the song is so much more direct than 'Horses And Barbed Wire'. Yes, there's a beat, but the directness comes from the singing and the guitar that underscores the vocal. This vocal is all about how things were/are between man and wife and ideally should no longer be. There is something biting in the voice of Elenne Klok, that shows the points she wants to make here. It's clear that she will not be a housewife in the desert with duties to her "dear", or at best a very cynical one.

Before I read the title of the song, I was back in the 'oooo' feeling again, for part 2 of the opening song. The same trick is played out, again with success. This time with the whole of Elenne May behind the singer in a more direct version of 'Horses and Barbed Wire'.

The mood of Stairs Raise Children remains small. And barbed wired. This time with an apron. There's a 70s link in this song that keeps eluding me. Something in the melody of the music I can't lay my hand on.

Elenne May makes me work harder with this EP. It is work that is rewarded with a subtle song like 'People And Brain Waves'. The most subtle percussion leads this soft song forward. A song easy to get lost in for a short while. The voice of Elenne Klok sounds broken as if this was recorded after a rough night. In contrast to the soft music.

Although this EP has three songs with the same name on it, it ends as it started, the price song is the title song. 'Stairs Raise Children' gets an even more mysterious element because of the slide guitar. The song is slow, laidback. Even more so because of the delayed notes of the slide gliding towards them. The contrast with the more direct parts gives the song a lift that descends again into mystery with a faint Pink Floyd memory.

It is all over after the shortest version of 'Horses And Barbed Wire'. There's no pulling in with 'oooos' here. I am left behind, ousted from Elenne May's world, after 55 seconds, with an option to push repeat though. Something I've found myself doing frequently.

Back to the cover. Obviously from the same photo shoot. This time the woman in the picture seems to have found what she's looking for and allowed herself some rest. A rest that is disturbed though. She's still sitting down, but is caught in a moment of some alarm. Perhaps even caught in the moment of getting up. Something's going on in the other part of the room. That something may be revealed when the third instalment of the three EPs is released later this year. Another little something to look forward to.

On Thursday 19 May there's a release party in Utrecht. (For info, click here http://venue-utrecht.nl/event/stairs-raise-children-release-party/) Expect me there and to report later.

You can listen to 'Aprons And Barbed Wire' here:

and buy the album here: