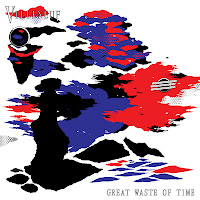 You can listen to and order 'Great waste of time' here.

It's always hard to be a support act. Except some friends and parents no one is there for you and usually the sound mixer is not interested in making sure the sound is even sub optimal. Villeneuf was lucky in that last account. The sound was softer than Moke's but good and made it possible for the audience to get a good idea what Villeneuf is about and follow the lyrics.

Villeneuf is a band based in Amsterdam and Leiden and around since 2010. Michiel van Poelgeest started gathering people around himself to play music beyond his lap top. This led to the second album under the name Villeneuf, but the first as a band, named 'Great waste of time'. Single 'Home' made it to national radio, as I had heard the song before without knowing who was behind it.

There are two things that jump out listening to the band for the first time. There's no drummer. Bas Ernst plays an electronic device and sits on a box that produces drumlike sounds. The harmonies between Van Poelgeest and acoustic guitarist Ronnie Verton are impeccable. (The third was that there was no bass player on stage, but the band had "left him at home".)

Music wise the genre Villeneuf excels in go from soft pop like Coldplay without drums and the U2 antics, towards bands like Midlake, a dreamlike pop that floats towards the audience. There is no bright flashing flame here, more like the pilot flame always at a constant. It all starts from the singing of Michiel van Poelgeest. His timbre is just right for his music and he is able to convey a layer of emotion in his singing that lends the songs character and honesty. On the other hand there's a need to present with a little more confidence in between songs. A question of getting the story right.

I was pleasantly surprised by Villeneuf. The band has a good mix between the electronic and organic part of its music, with a keen ear for melody and harmony. So, expect some more on them in the coming weeks on this site when I review 'Great waste of time'. In the meantime, and here's some sound advice, listen to Villeneuf's album yourself!