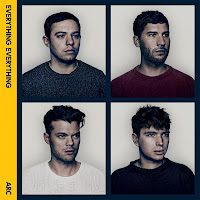 You can listen to 'Cough cough' here.

Arc is Everything Everything's second album. It follows 'Man alive' of 2010. Perhaps it was the name of the band that abhorred me, bringing to mind memories of bands with double word names like Medium Medium, Duran Duran in the early 80s. Any way, I did not have much room for 'Man alive' in my life in 2010. Pre-conceptions are usually not the best things to go after in life, so I gave Arc a chance and now see.

Everything Everything, not very modest these young gentlemen judging by the band's name, are they?, can be seen as part of a movement. Django Django paved the way for them as far as I am concerned. Like Alt-J did also recently. A little further down the road live bands like Foals and Yeasayer. In other words we are in the realm of bands that search for complexity and harmony in the same song. Everything Everything balances on this thin line in a very pleasant way. From the very first notes in opening song 'Cough cough' I knew that this would not be an average album and I better strap on my digital seat belts.

'Cough cough' opens the album and set me on the wrong foot a bit. It sounded so much like Django Django in a song like 'Default'. Luckily for Everything Everything the band takes a sharp left very early on in the song, catching my attention. As a whole Arc is an album that succeeds. I was challenged as a listener to follow the band's musical adventures, there is a lot of variety in approach and arrangement to songs. Even ballads like 'Choice mountain' get a treatment that make it special. When the strings/synths set in, I was completely surprised, caught off guard. The Elbow connection in the music of Everything Everything is showing here quite evidently. 'Duet' is another song that at the basis is completely beautiful, but at the same time has so many "distractions" from the plain beauty. It is what makes this band stand out and distinct. One of the more normal songs is 'The house is dust'. The shiver down my spine sort of great song. 'Cough cough' and 'Armourland' are examples of more rhythm based songs, but also of the Bloc Party light influence on the album. Producer David Kosten has assisted Everything Everything in making Arc stand out in many a way. Like a beautiful, multi-coloured sunset on a field of Prickly Pears at times, but special and outstanding.

The high voice of singer Jonathan Higgs may deter some people. Give it a chance though, it fits the music Everything Everything makes. The mix between electronics and traditional band instruments works well and allows for the accents the band presents in the arrangement. Higgs' voice is the constant in most songs, sometimes accompanied by high background vocals. The music is allowed to do anything that feels right within one song. Do not be surprised by many mood changes, when drums, guitar, synths coming in and disappearing out of the mix. It's like a song is not allowed to start at a and proceed to b in the way most bands do. The difference is not in the verse - chorus - verse - chorus - solo - chorus, etc form, no, it's purely in the arrangements. Instruments are only present in parts of the songs, setting these parts off against each other within a song. As I said a trend in music, ike several recent reviews attest to.

Arc is an album that is complexly beautiful. An album that forces you make an effort to discover her beauty. Do so and you will not be disappointed as Arc holds many a gem.

You can order Arc here