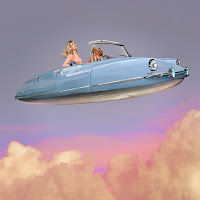 Futuristic retro. Something like I remember the Hanna-Barbera cartoon 'The Jetsons' from my earliest youth in 'The Flintstones' comic books. Bobbi's album cover covers her music pretty well. She sings like a French sigh girl from the mid 60s. Her music of course follows suit, but has modern overtones that were impossible even to dream up at the time. Modern retro in other words.

It is an album that I will not spend too many words on but do would like to call your attention to. The way it starts is already so pleasant that it is worthwhile putting on. The dry plopping bass reminds me of naughty Serge Gainsbourg songs of the 60s, that returned just a little bit more suave on Air's 'Moon Safari' in the late 90s. Where does the time go? Nowhere, it's us moving down life of course.

Bobbi sings her light sounding lyrics about her bed. My French is rather abysmal, more words than sentences. Her voice sounds so innocent, that she could be singing about her favourite teddy bear on the side of her bed, who knows? The fact that she wants to be kissed in the next song suggest something else happening in the bed though. I will not start about what the press photo's and single sleeves suggest, but then, I did not choose to make and publish them. Let's keep it at suggestive.

The big surprise comes when I learn that the name of Bobbi in real life is Margriet Planting, a Dutch model and singer, formally of Zazi. She wrote the songs with Gerry Arling and French lyricist Cristal G. Producer Reyn Ouwehand gave the record an authentic sound that at the same time sounds modern.

That sound mostly is light and ideal for warm summer evenings, when the light remains with us for a long time, a cool wine is within reach and your love is sitting by your side. Un Jour is ideal music for those moments. Music to enjoy the moment for as long as it lasts. Soon after I will put on something more substantial, but until then, Bobbi is my companion alright.