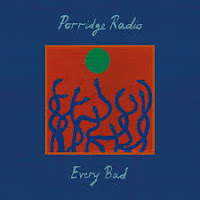 Everyone getting to know Porridge Radio by putting on the album, hence by its first song, something that I tend to do, is led into an extremely confusing song called 'Born Confused'. "I'm bored to death, let's argue", sings singer and songwriter Dana Margolin. Her voice slowly moves from beauty to confusion, to thankfullness and ending in utter and total desolation. "Thank you for leaving me. Thank you for making me happy", she sings. The last sentence is sung for a minute or so, repeated, repeated and repeated some more, while slowly but surely the meaning of the six words change. Different voices of Margolin are mixed over/under each other, until the one of utter grief and close to madness remains. It is hard to remember first songs on an album by a new band making an impression like this. "Sorry", '925', you've been beat this year. This is the like of Franz Ferdinand's 'Jacqueline' in 2004, were it not that 'Jacqueline' only took a few seconds to knock me off the stool at the record store I was listening to it, and 'Kontroll På Kontinentet' by Kaizers Orchestra, something like that.

Now one song does not equal a great album. True. Porridge Radio does deliver though. There's no doubt that I will buy this album soon. Why? Because of the simple reason that so much is going on on Every Bad. This ranges from grunge influences. The loud-soft of Nirvana and Hole is all over this album. The different voices of Dana Margolin that are all over this album. The endless repeat of one lyric line, which I usually see as a sign of inspirational weakness becomes a strength. How many times can you deliver a line differently, over different chords with different voices? Many times without boring me for a single second. And the moment the storm and rage is Margolin's voice and not the band, Sinead O'Connor enters my head. 'Troy'. 'Nothing Compares 2 U' anyone?

Next to that the music holds so many little, beautiful surprises. Melodies that seem to do everything right. There's not even that much going on so in most songs, it is just that what goes on has an incredible depth despite the elementary music. While over that all that phenomenal voice turns itself inside out and back for all of us to hear. I can't help but wonder that a new tremendous talent has presented itself to the world. More and more I am convinced that I'm listening to the first truly big band of the 20s. A band that sweeps all other alternative rock bands that broke through in the past two years aside as being the only one that truly matters. Huge words, yes, I know, but listening to 'Long' I simply have no doubts left.

So what is Porridge Radio? A band formed in Brighton in 2015. There are three releases before Every Bad, but all from 2015 and 2016. For all means and purposes Every Bad is the first true album in which the band presents itself to the whole world with an international record deal. Next to Dana Margolin, keyboardist Georgie Stott, bass guitarist Maddie Ryall and drummer Sam Yardley play in the band. Together they create the magical sound that makes up Porridge Radio and Every Bad. Instead of touring the world the band is in lockdown just like the rest of us. If ever there was a timely present for the lovers of alternative rock, here it is.

"I'm ugly deep inside" Dana Margolin sings in 'Pop Song'. Maybe it is true that beauty is only skin deep in her case. As far as her band's music is concerned, the beauty is unfathomably deep. There simply is no end to it. "Please make me feel safe", she calls out for next in the song. In a song as warm as a cocoon. What can I possibly add?

You can listen to and buy Every Bad here: