Downloads From The Universe. The Jason Daniels Band 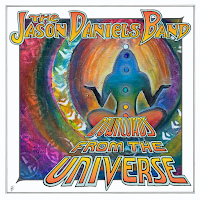 That is quite a legacy to be suggestion when someone calls his band The Jason Daniels Band. The name Charlie pops up within nano seconds. Although I know only one song by that band, it is one that can still be heard on the radio on a regular basis, despite nudging towards becoming a half century old.

This is The Jason Daniels Band and yes, the music is in a country (rock) vein, so sounds familiar, barring the fired up violin. The mystic/psychedelic cover has not much to do with the content, so if you expect a trippy, psychedelic album, you are at the wrong address at this moment. Mind, this is where my first impression and my new reality are starting to drift apart fast.

Strangely enough the opening song, 'I'm Not Going Down', does have some wavy gravy starts. Even Les Dudek of the mid 70s comes to mind. There's a warm Hammond sound, a funky guitar and a suave saxophone. Not to forget the gospel like oohs being sung in the background. This is total 70s alright. Without in any way sounding anachronistic. 'I'm Not Going Down' is a far to pleasantly, swinging song for that.

The album continues in this way. Although it is the electric piano that takes over a little from the organ as the most ear catching instrument, banging away its chords and solo. Jason Daniels' voice has a nice edge to it that contrasts nicely with the suave, female backing vocals. 'It All Can Slip Away' again has an extremely nice vibe, that makes limbs and mind move.

Moving towards song three, 'Music Is A Prayer', the sound becomes somewhat more traditional and one name pops up in my mind: JJ Cale. Especially 'City Girl' from the 'Grasshopper' album. The Jason Daniels Band is far less subtle but catches that JJ Cale vibe with its fuller sound. Something that happens again with 'Dead And Gone', where 'After Midnight' comes to mind.

When a harmonica is added in 'I've Been Ramblin'', the album gets a different sound, but the 70s country/southern rock is even more emulated than before in this song. There may not be a three guitar line up, but a two keyboardist one, the musical intent is clear. Also Bob Dylan in his most rocking outings like in 'The Groom's Still Waiting At The Altar' comes to mind.

Jason Daniels stems from the Napa Valley in California, recorded his first album in Nashville but wound up in the town made famous by the Nancy Sinatra & Lee Hazelwood duet, Jackson. Here he formed his band and after years of playing together recorded his second album, with the word Band added to his name. Together with some extra musicians bringing the band beyond the guitar (Daniels), bass (Rob Wicks), keyboard (Chris Nash) and drums (Murph Caisedo).

Downloads From The Universe is an extremely swinging album. The one thing that puzzles me is that after the first two listening sessions I came away with the impression of a nice country rock album but not more than that. Listening more often hardly anything from that impression is left. For that the album swings too much, is far too diverse and brings together so much more influences that are incorporated successfully into the whole of the sound. The deep south even enters with 'Get Down With Now' as this song holds some strong gospel over tones in it. Again that electric piano and Hammond play such a nice role in giving the song its frills and thrills.

Having told all, I have to conclude that Downloads From The Universe is one of the nicest albums in this genre I've heard in the past years. Surprising and so diverse. Certainly an album to invest (time) in to get to know better and better. It definitely pays off, with great satisfaction guaranteed. What remains to be said, is the Charlie Daniels is no relation, but his uncle George was married to Tammy Wynette. Music does run in the family.

You can listen to and order Downloads From The Universe here: