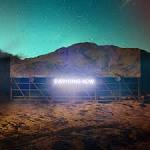 The big release during my holiday was of course Everything Now, Arcade Fire's new album. Now those following this blog and its previous incarnation, the Magazine, know that my relation to this Canadian band is not an easy one, at best ambivalent. 'Funeral' surprised me like most people, although the album did not become the long time favourite I had expected it to become at the time. 'Neon Bible' was not for me. Neither was 'The Suburbs'. 'Reflector' did get a favourable reception on these pages.

In 2017 there is the band's fifth album, Everything Now. Now I had read about the eclectic outings on the album, before it was released even, but nothing prepared me for what is jumping at me during the first listening sessions. And here I was thinking that disco was over since the early 80 to mid 80s, when the death call had not reached Italians and Spaniards yet. Arcade Fire is certainly trying to breath life into a dead horse. I can't tell yet whether I can mention a miracle of resurrection in 2017. Arcade Fire is playing like it pulled the miracle off though.

Everything Now, Alles Nu, as I saw an LP called in the stores. 'I Want It All' was the comeback hit for Queen in 1989. This amounts to the same. The difference is that with the advent of the Internet everyone has everything one click away. Discontent, fear for the future, fear for the neighbour who is a little different, fear for a president, it all is rife. It is my opinion that the two are totally connected. Having everything does not make someone happier, but more afraid it seems. There is a second difference. Freddy Mercury was a call for hedonism, here we are listening to an accusation of.

The album starts with where it ends, 'Everything_Now (Continued)'. The intro ends with a cacophony of sounds, alarming, tensed, terse, on the brink of overload and excess. A shout as loud as the Japanese singer's on Bowie 'It's No Game' is in there. What follows is a total surprise and one of the highlights of Everything Now.

The big piano sound with which the title song opens, the rhythm behind it is all a giant nod to the heroes of the 70s and earliest 80s, ABBA. The 'Waterloo' piano is all over the intro. Including the light disco touch. The happy disco has a deeper layer. 'Everything Now' sounds like a threat, an accusation, a situation someone shouldn't strive to be in. Even discontent and despair sound through more and more. The title song of Arcade Fire's new album is talking volumes. "I need it, I can't live without it, I can't live" on one hand, on the other, mummies and daddies who are never at home. Need I say more? The way of playing is ABBA, but more and more 'The Day Before You Came' as 'Everything Now' is progressing, than 'Mamma Mia' which seemed to be the case at the start. The song is growing on me, so who knows what could happen to the whole album?

The disco of the late 70s and early 80s continue in 'Signs Of Life'. The atmosphere is totally 'Saturday Night Fever' and songs like 'Your Love' by Lime and Sylvester's 'You Make Me Feel'. At the same time Arcade Fire manages to remain alternatively chic. What I have trouble with is how to place this song into my universe of anti-disco, combined with the fond memories of dancing with girls at the time. The more I played the song another dimension presented itself: 'Wordy Rappinghood', the big hit by Tom Tom Club. With Win Butler rap-singing like Tina Weymouth and her sisters did.

The disco continues with 'Creature Comfort'. The song is dark again, with Régine Chassagne singing at the high end, which gives the song an upbeat kind of 'Fame' feel as well. A strange combination that works quite well. The difference between the pulsing beat and the lyrics again are almost baffling. Fact is, this is another of the strong songs on this album.

By then it is clear that for Arcade Fire there are no longer boundaries when making music. The band does and can do what it wants. In that it has to be lauded. It never walks the obvious path and nevertheless has millions of people who follow the band's career and made it a headliner at all international festivals. Whether the dab with disco and some faint reggae rhythms, as in 'Peter Pan', makes alternative rockers happy, time will tell. It certainly makes dancing possible when attending an Arcade Fire show.

Some Stones elements in 'Chemistry' (as in 'Dance, Part 2 e.g.), punkrock ('Infinite Content'), country ('Infinite_Content'), the point on the album where the atmosphere seems to change, as the three songs let the disco rest for a while. When Chassagne takes the reigns in 'Electric Blue', we are back in disco, with OMD like synth riffs. The 80s are very much back I notice more and more. Sometimes I even like it, not here I'm sorry to say.

The album comes back up with 'Good God Damn'. The Clash in its 'Sandinista' days in the guitars, the bass is not playing along though as it is the lead instrument in the song and plopping away in its suave sound and melody. The song is empty, with just a faint organ, that gets the solo of a few notes. Together it is enough to score a point here.

OMD comes around again. 'Put Your Money On Me' is more interesting that any song that I heard on the new OMD album by the way. Again Arcade Fire presents a song that has a pulsing rhythm, but is far from one dimensional. It mixes the disco with Roger Waters/Pink Floyd in the vocals. It creates a very much alive atmosphere. Something that came totally unexpected.

'We Don't Deserve Love' may be the most traditional Arcade Fire song on the album. In my case it is a song that creeps up on me. From nothing special, the ongoing pattern brings me into a kind of trance. The ta-ta ta-ta tata-ta that goes on and on does the trick.

It all ends where we started, with 'Everything Now (Continued)'. A much barer and slower version of the title song. With the cd on repeat, the album is continuous. The trick with the strings, that play the lead melody of the vocals in the title song, works really, really well I have to say. A brilliant surprise at the end of the album, that ends abruptly.

Having heard the album several times by now, I still have a hard time to really fathom what I'm hearing, to really know what it is that I have to appreciate (a lot) or dislike. This is different from 'Neon Bible', an album that I just did not like. Everything Now is an album that confuses me. I'm hearing sounds and rhythms that I detested strongly as a teenager and young man and now I hear them in a context that in several songs I seem to appreciate. Not all songs, but the needle seems to be swinging towards the positive. Too soon to tell though. Time will tell, if I decide to invest in the album over the coming time. I may just buy the Dutch-titled version of the album on vinyl. It seems to be special enough to do so and favourably priced, compared to the red and turquoise English versions. (Am I to collect them all?) For now this attests to where I stand at this point in time. Intriguing, isn't it?

And so there is only one thing to complain about: How am I supposed to put my first or favourite record on after I blew up my speakers multiple times?

You can listen to the album here: