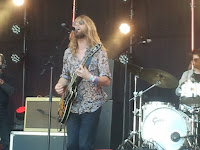 "I dare to make a prediction", said the grey haired man in shorts and a red blazer introducing the band on stage. "Within 6 months this band will be on television and next year it will play all the festivals". A bold prediction, based on a previous show he had seen earlier this year.

My introduction was through the mini album 'One' the band released recently and was reviewed quite favourably on this blog. In fact most of the six songs are highly attractive to listen to and live reached the people who cared to listen to them in a very direct way. The enthusiasm on stage was catchy and especially the singer/keyboardplayer was able to connect to the audience and get them to participate. 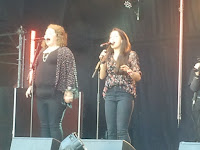 At the same time I can't push away the feeling that the main stage at this festival came a bit early early. Some band members were too happy to be on this stage and others obviously relieved when one of the more difficult breaks in a song came off well. This has to go before the band is ready for the prediction made. At the same time this comfort can only come by playing more and more together, on bigger stages. This process has to start somewhere. So why not here in Haarlem?

Setting this aside, The Royal Engineers most of the time produced a big smile on my face and made me sing along to its own songs, with top songs like 'Aeroplane', 'Get Up' and 'Hey Sister' in the best Herman Brood and his Wild Romance/Gruppo Sportivo tradition and to the Brood cover 'Doin It' and The Box Tops' 'The Letter'. 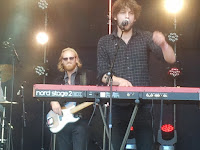 With the two female singers the band infuses its songs with a whole lot of soul and delicious harmonies, there are some hippie space song elements, the rock/soul of Herman Brood and some sophisticated jazzy elements, all within one song at times. That does need some fine tuning here and there, but the band obviously does not limit itself to anything. Ambition is a good thing to have and The Royal Engineers have it in abundance.

Yes, I agree with the grey-haired gentleman introducing the band, but my prediction is that the band needs a little more mileage than six months. In the meantime I'm playing 'One' once again and enjoying every second of it. Live the band is good and will get better. 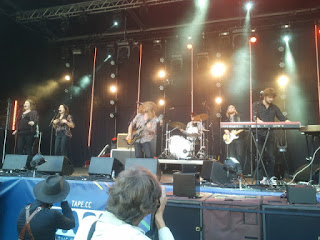