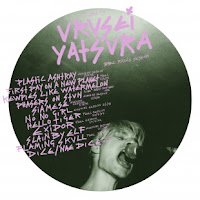 In the mid 90s and very early 00s I lived in ignorant bliss where a Glaswegian band called Urusei Yatsura was concerned. Between 1993 and 2001 the band released three albums, many singles and contributions to compilation albums. This ignorance remained in tact until the spring of 2016 when I received an e-mail from the Rocket Girl label in which this album was announced. I listened to the link, liked what I was hearing and only then found out that I was listening to a compilation album with radio show appearances from the 90s.

Let me take you back for a while. Urusei Yatsura was a four some. The band was started by Fergus Lawrie and Graham Kemp, who met at university. Elaine Graham joined on bass and brought her brother Ian on drums. The bandname was nicked from a manga series with the same name and said to mean noisy stars. The first recording 'Guitars Are Boring' was put on a compilation album which caught the attention of the late John Peel who brought them in for a studio session. From there the band started a relatively short career that brought three album, all with the band name in the title.

The music on this session compilation album can be filed under alternative rock, with some U.S. punk references. When the band started to release albums the Oasis - Blur competition was in full swing, but Urusei Yatsura has nothing to do with Britpop. The music is closer to Smashing Pumpkins and other grunge acts from the U.S. Loudly played guitars are in front of everything with a few overdubs to add melody lines. The singing is somewhere between neat and rough with gives it an attractive edge. Just like in the 90s one or two of the songs are too much, others are just so fine.

Would I have liked this 20 years ago? I may not have actually. That time changes taste preferences that is a well established fact. In my case not necessarily to "safer" and softer music. In fact I could have lived without this album easily. Now that it is here, I'm glad to have gotten to know the band. Just one of these little surprises that sometimes come my musical way. Urusei Yatsura was a fine outfit, that during these sessions was on the top of it game. The past 15 to 20 years have not taken anything away from its performance then.

You can listen to 'Hello Tiger' here:

or buy the album on Bol.Com: