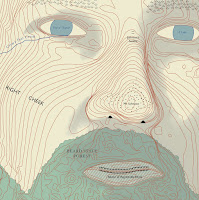 Some months back I was sent a link to the first single of the forthcoming new album by Lawrence Arabia, 'A Lake'. This intricate pop song which opened a plethora of memories to many, many songs, spoke to me immediately. This made me more than curious to hear more.

Now it is all fine and well to write "the new album by", but for me 'Land' was the first song I ever heard by James Milne, who releases music under his nom de plume Lawrence Arabia. In fact Absolute Truth is the fourth album under that name.

Absolute Truth is released on the Flying Nun label from New Zealand with artists that hardly ever make it to The Netherlands. In the past year and a half a few artists on the label made it to this pages, the last being avoid!avoid. I'm glad to write about another fine album from the label. No matter how different the two albums are, there's one common distinction: quality.

Absolute Truth kicks off with the single 'A Lake'. An introspective, two chord beginning on an acoustic guitar is all there is. Anyone with a little knowledge of pop music can name a dozen songs who start out that way, the same chords and all. It is when Milne starts singing it is clear that 'A Lake' is not your average pop song. The vocal melody goes here and there, up and down. Sliding over the chords, and later the rhythm, while exploring all the directions it can go into. Far beyond the obvious.

Lawrence Arabia manages to keep this level of interest in the music very much alive in what follows. The soft toned songs, all based on a fairly minimal instrumentation, sooth, please and intrigue at the same time. When James Milne sings "I wanted to impress you" in 'I Waste My Time' it is with an undertone in the keyboard/organ that is accompanying him that makes me prick up my ears. What is really going on here?

The music itself brings Crowded House to mind foremost. A stripped down version that is, but the striving to find the most ideal pop song, to put the most beautiful oohs and aahs in the correct places, it is all there in a much more elementary form. In a way it is harder as there is less to impress with. Secondly Paul McCartney in his most lazy form, when he is not out impressing the world, but at his most pure and intense. Lawrence Arabia is neither, but evokes these moods in a pure and surefire way, by being itself. This music is pure and reaches a maximum result with a minimum of effects.

There is one major risk to Absolute Truth. If someone only listens with a half ear, the music will seem shallow and lightweight. To do so is a major mistake, but it is understandable. Anyone who lets the album in, submerges under the music, is in for many a pleasant surprise. The people of Flying Nun have a keen ear for quality. It's not for the first time I can write this. Absolute Truth? In a biased way I'll state yes.

You can listen to 'A Lake' here: