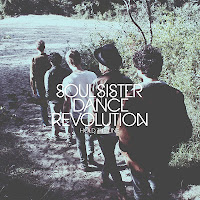 You can listen to the band live here.

You can listen to 'Hold the line' here.

From the moment these boys got on stage I had the idea, I knew them from somewhere. It took me a while before it finally dawned as you will read on later. Friday 7 December this band from The Hague played the support slot for Di-Rect at the LVC in Leiden. (You can read on that later this week.)


That morning I had heard a song I liked on the radio by Soul Sister Dance Revolution. I didn't get the title, but I liked it, although it reminded me a lot of 'Unbelievable', the 1990 hit of EMF (Eternal Mother Fuckers?) and a Kasabian song of the first album that I always forget the title of. Looking at the LVC website what time we had to be in, I noticed the support act for the first time. So let's be on time. I wasn't disappointed, although I was the only one of a party of three who wasn't.

Soul Sister Dance Revolution has the energy, the understanding what makes a good and/or exiting song, but also has a lot to learn. That they are 3FM's Serious Talent is quite understandable, even earned. Single 'Hold the line' has a lot going for it and several other songs have what it takes. Their Handsome Poets/The Killers interpretation 'Soldiers of love' has everything to make a huge hit and a top 2000 song for the future. By the time the band started this song I had already laid the connection with The Fudge concert in Het Paard in March (read that evening's review here). Again I was surprised how good this song is and found myself singing along, like most people in the audience. This is a clear sign, that this band is on the right road. Support act and have people singing along without an album out? Not a lot of bands can claim this. As enthusiasm and energy shine through its songs, Soul Sister Dance Revolutions is able to make its audience move, even those who are there to see the main act. Again not a lot of bands can claim this.

The band members have the looks and the moves. In the circa seven months between the two gigs the band obviously has grown. Overdoing it is an issue, although the keyboard player perfectly fits in the line of like acts as Infadels, The Automatic and Kasabian. Acting very cool and posed. The long chain around his neck may cost him a couple of teeth any day though. Stage - audience communication is something that needs to be worked at though.

As a well meant advice. Most songs need just a little extra to make them stand out more. That could be a chorus, more variations in the harmonies or variations in the guitar parts played. Find a producer that helps with these aspects, that challenges and I'm very much convinced that the début album will be all that it promises to be, listening to the two gigs I saw this far. Soul Sister Dance Revolution is young and has the future. Go for it boys! and see you again.