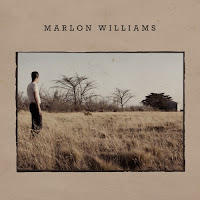 The title to this post ought to be something like the music chest of Marlon Williams or the fallen over shelves of his record collection. Looking at his age probably the overly shuffled i-Pod is more appropriate as a metaphor. Williams plays so many songs in a different style, that I simply wonder who this guy is and what does he want to be?

The first couple of times that I played 'Marlon Williams' I ran for cover. This was too much, not just too, way too much. 'When I Was a Young Girl?'. Get out of here! The styles of singing, the musical styles, they change with the song. Yes, it can all be placed within the country, roots, singer-songwriter type of music with strong links to the young Scott Walker or the first Last Of The Shadow Puppets. This is extremely wide, isn't it? There are only nine songs on 'Marlon Williams', but by the time I'm through I'm exhausted.

'Marlon Williams' has the right title for the album. This must be all of him. All six or more personalities he holds within him, but certainly all. Unless the seventh and following pop up on the next album and Williams shows us his view on hip hop, thrash metal and opera. For now this is a lot to grapple with, but most of the songs are special. Songs of a multi-talented singer-songwriter who isn't afraid to show us what he's got and with these, mere nine tongs, that is a lot.

Marlon Williams is from New Zealand's southern island and 25 years of age. He has toured the country with a band, then as part of a duo, but it all started in the Christchurch church choir. I can't find direct influences on that one in his music, although that may be the reason for his different ways of singing and obvious mastery of his voice.

I will refrain from mentioning all the twists Marlon Williams takes us on on his debut solo album. What I will do is point to the start. The up-tempo country song 'Hello Miss Lonesome', with Chris Isaak style held long notes, gives a distinct expectation. More so when 50s style background vocals are added to the song, as is a near feedbacking rock guitar. Riding the feedback monster is taking place in here in optima forma. 'Hello Miss Lonesome' almost could have been in a 50s cowboy movie. '(Ghost) riders In The Sky' or such.

The switch to 'After All' is huge. The country-indie style rock song reminds me of the songs on Ron Sexsmith's last album 'Carousel One' as well as the master himself, Ray Davies. This is one of the songs on 'Marlon Williams' that I really, really love. After that the tempo goes down in 'Dark Child', there is a surreal video on You Tube to this song. Again in the background all sort of wild sounds take place. giving the song a dark, spooky layer. There's something wrong here for sure. And it goes on and on, where the name Scott Walker in his late 60s style comes in in a decisive way. That is mixed with sounds that Walker at the time could only dream of in his wildest imagine.

The lyrics? Yes, when you start listening in some songs some weird shit is going on. I'll let you discover that for yourself. I already gave away a title and Williams is not afraid to give a voice to people that act before he was even born.

So, where does this all leave me? Is 'Marlon Williams' a masterpiece or the work of a crazy person? I simply cannot tell at this point in time. What I can cede is that I'm intrigued beyond just a little. That Marlon Williams has made a fascinating album that makes me think, puts me on my feet, shakes me around and sets me to work. How many albums can claim such a thing? Very, very little.

You can listen to 'Strange Things' here: