Recently Keith Emerson died. He took his own life, for reasons unknown to me, at the age of 71. To me he is mostly a famous name, not a musician I revered. At the age of eight I certainly had heard him play his organ on 'America', The Nice's cover of that famous song from 'West Side Story', that I already knew because my uncle had that album and played it regularly. Although I did not fully realise it at the time; this is what an extremely musical mind can do with music. To be an original with someone else's compositions. Fairly recently I reviewed the first The Nice's album on this blog in my 1968-1969 albums containing hitsingles of the day series. It showed some mixed emotions on the album.

Keith Emerson joined Emerson, Lake & Palmer of course, but that was too much classic rock for me. 'Lucky Man', 'Fanfare For The Common Man' and 'Peter Gunn' were hits, but after that silence in my universe as far as Keith Emerson is concerned. After having read the below, I am tempted to retry over 40 years down the line.

For me ELP is three songs and a single try at 'Pictures At The Exhibition'. 'Fanfare' and 'Peter Gunn' are mind blowing versions of the original songs though. The above is just my introduction. This is what this post is really about.

On the passing of Keith Emerson I received an e-mail from a colleague from the U.K. that I discuss music with regularly, having discovered each other's passion. A colleague of Mark, Gary joined in. A story developed of musicians having made a lasting impression on these men in their younger days. I was allowed to share the conversation with you. 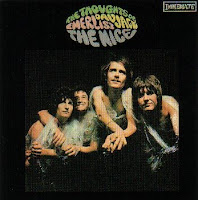 As I wrote, it all started with an e-mail from Mark, without me having an inkling of what would happen next:

"Just heard the shocking news about Keith Emerson's suicide. This is turning into a very sad year for our generation of music fans. I remember Wout saying when we met earlier this year after Lemmy's and Bowie's deaths: "who's next?"  We are now finding out, very sadly".

I responded as follows:

"Every time I open Twitter and see a pop star of a certain age trending, my heart skips a beat. I have never been an ELP fan, but they certainly have made some impressive music.

And, let's not forget George Martin".

"Yes, George Martin's passing was very sad news for Beatles fans but not such a shock as he was in more ways a link back to the previous generation and we might well have asked "oh, yes George Martin who produced the Beatles records: er, is he still alive?". He was a critical factor in the magical Beatles mix of converging genius and fortuitous opportunity. He guided them on the essentials in the early days - for example how fast to do songs like Please Please Me so that they were catchy enough to chart. They soon learnt that themselves and George Martin helped in a very different way from 1965's Help album onwards when the group started to innovate in the studio: he helped them do that because he had the skills from working with studio musicians in the 1950s, for example how to orchestrate their ideas; technically because he helped to make sure EMI invested in new technology like multi-track recording; and artistically he proved to be on the same radical wavelength as John and Paul so knew instinctively how to enhance and realise their ideas.

I think you could say Keith Emerson in The Nice and ELP represented our generation's effort to link rock'n'roll to classical music and to be transformed and inspired by it. Although progressive rock proved to be a dead-end artistically of course, it was important for exploring how rock music might mature and be recognised for its artistic worth -  so it was a key phase that rock music had to go through and Keith Ermerson truly shone at its zenith. His apparently desperate death by his own hand makes his passing even more shocking. As my personal tribute I will go out and buy a replacement vinyl copy of Trilogy for the one which I bought and proudly sported in my penultimate year in secondary school all those years ago".

After which Gary joined:

"This is just too sad.... Keith Emerson was my musical idol and inspiration. As Mark will know I am a huge ELP fan, seeing them for the first time at Wembley in 1974, it was the most spectacular concert I have ever seen, quadraphonic sound, (for the time) innovative lighting effects and the bass of Emerson's Moog made the hairs on my legs vibrate in sympathy! The music and musicianship was superb....

I can honestly say that it was the best gig I have ever been too and nothing I have seen ever since could match (except maybe ELP at the Albert Hall 18 years later in 1992)....

I am heart broken at Keith's passing not only as I felt a close connection to him, the fact of his death and the way he went, but also because it means I will never see ELP play live again...

RIP Keith, your music, musicianship, showmanship and inspiration will live on forever.... I will never forget, and I think many others will cherish your memory...

As things go in the U.S., some things are not private. So for those interested Mark sent the following link:

"It occurred to me yesterday that if Keith was able to see the profound outpouring of grief, tribute and love from everone on this FB Group as well as from other sources, I think he would be astounded and amazed..."


"Even though I am still pretty much in denial that he is gone, I am starting to feel a deep connection with all of you who so publicly are declaring their sadness, feelings, thoughts and memories. I hope that you all feel as I do, that we are no longer alone, even though Keith has left us? And that we can be sure that all of us will never forget him, his music and his legacy?

I hope that if Greg and Carl, Keith's family and close friends see this huge outpouring of emotion from this FB group, that they will also not feel quite so alone and that there is at least some comfort knowing others also are grieving?

I also hope that Greg and Carl will feel that they are also held in such high regard by us all (and if anyone is in contact with them, please do let hem know on our collective part).....

Please do not forget Keith, ...please do let Greg and Carl know that they are also loved, highly respected and revered..... I think Keith, Greg and Carl became a very important part in all our lives. I hope that they will now know this and also begin to understand that it will always be that way...... From the Beginning....."

For those on Facebook, you can read more on the impact of Keith Emerson on his fans here:

The way music and musicians impacts men could not have been described in a better way, I think. This happens at a time when we are most impressionable - or it does not happen at all, is my experience. All that comes after is compared to what we see as our standard. Unfortunately this means that the three of us have to brace ourselves for more rockers of the 60s and 70s to pass away in the near future. Their music will live for ever. Just click on the link below and you are catapulted back to the 1970s. Music, long hair, psychedelia and all. But above all: music.

With many thanks to Mark Carvell and Gary Hunt for sharing their thoughts, emotions and appreciation of Keith Emerson,

You can listen to 'Pictures At An Exhibition' here: