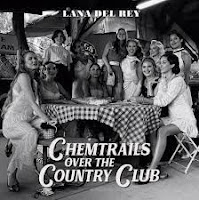 It appears a lot has been written on Lana del Rey in the past year and not all positive. Whatever it was about, it all passed me by, as I have more to do than follow artists on a daily basis. For me it's about the music mostly and with Chemtrails Over The Country Club Ms. Del Rey delivers.

For me 'Ultraviolence' was the album that got me into Lana del Rey, the two albums that followed were certainly less interesting and then 'Norman Fucking Rockwell!' got into my life and I could not really believe my ears. No, it was not about Dan Auerbach as a producer persé. NFR! was a great album, so expectations were quite high and I guess in the whole world. The pressure on the shoulders of the singer and her producer Jack Antonoff must have been pretty huge. What best to do than deliver?

Chemtrails ... as a whole is a more temperate album. The mood is more constant. This may fool people into a wrong conclusion. Like the one I read recently. Chemtrails ... is like an afterthought. I beg to differ. This album is a manifestation, a mirage in the desert that turns out to be the real thing. My ears invite me to fully surrender to the music that is like lapping warm water carrying me, soothing me, caressing me. What more could I want?

So, yes, you are right when you say that there's nothing exciting going on on Chemtrails .... If exciting means loud, exuberant and what not. Lana del Rey offers another form of excitement. The kind of being able to be thrilled by beautiful music. Of the kind of being excited to be able to hear her new songs.

These new songs are so subtle. You have to listen carefully to notice the swelling of music in certain passages, as they can pass you by easily when listening with half an ear. Pay attention and the warmth of Chemtrails ... will wash over you.

After several sessions with the album I can only conclude that Lana del Rey has settled herself among the greatest modern musicians. Where most are not for me, she certainly is. With three and a half album scoring on my good side, I have to conclude that I am a sort of fan.