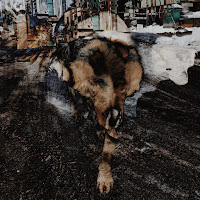 Listening to Primitive Energetics for the first time I notice how sweltering the album sounds. As if the music was made in the mid summer in the Louisiana swamps. Where every movement is met by air that simply forces the limb to lie down again or by a swarm of insects going for the kill.

Joe Volk has chosen to make a dark album, in sound, in atmosphere and feel. At the same time I was attracted immediately. There's no denying there. Forget every thought about a pop feel or easy pleasing. It just is not happening on Primitive Energetics. It is an album that rides over me like a steamroller, flattening everything in front of it. Not because of the volume but by the sheer intensity of the music. In that Volk has made an impressive album.

This album is co-credited to Naiara, Joe Volk's touring band after releasing his previous album in 2016, 'Happenings And Killings'. A review can be found on this blog some years back. Together with drummer Thys Bucher Volk laid down the basic tracks that were slowly filled in after these sessions.

At times the music on Primitive Energetics is frightening. Screams are spread out loudly over the listener, as if Volk and co are in extreme fright or pain. Bloodcurdling screams enter my ears and brain. If I hadn't known the screams came from the record, I for certain would have an ultimate fright of flight moment. It is my reptile brain Volk is communicating with, not my intelligence or less prime ordeal emotions.

Not the whole album is a dark as this. The second song, by comparison, is an acoustic outing. Easy listening, well almost. For the rest Primitive Energetics is an album befitting the times, despite the fact Joe Volk cannot have known what would be awaiting us at the time of making this music, the real and latent fears people are experiencing since March 2020 show through completely.

At the same time the album holds some excellent songs. Take 'Whitesheet' with its driving guitar and drumming. This is an excellent song. Yes, dark, as all is, but fitting in a long alternative rock tradition going back to the 1980s. In that sense Primitive Energetics can be seen as an extension of the doom and gloom albums from the early 80s. Even some synths enter 'Whitesheet'. Only the world is in fear of something completely different than an atomic bomb. There is a comparison of course. Both situations go back to the smallest particles, atoms and cells.

It is not clear to me, for what reason Joe Volk descended into this utterly dark musical environment. The Englishman lives in Bern with his wife and children. So may be happy even. This is what it is and what we have to make do with. Primitive Energetics may not be a joy-spreading album, it is certainly an album to listen to with attention. A lot of thought and attention went in to it, into it's structure and texture, resulting in an album that is special, a little scary and good. On days like these, that is more than enough.

You can buy Primitive Energetics here: