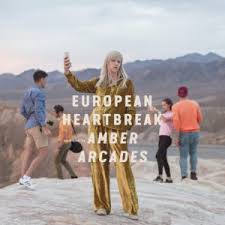 Not all albums reach my in or letterbox and thankfully so. Yet, when an long-awaited album does not Spotify helps out, until the opportunity presents itself to go out and buy the record. There is a downside though. Listening and forming an opinion all mean that the review follows long after the release date. Some things are as they are and I did not hurry myself here.

Amber Arcades came into my life with a five song EP followed by the oh so pleasant album and fantastic single 'Fading Lines'. Truly one of my favourite songs the second half of this decade. Last year a new EP followed with the even better song 'It Changes' on it. Bars and expectations were raised by Amber Arcades. Are they met?

Yes! It is that simple. European Heartache is one of my favourite albums of 2018 so far. It seems Annelotte de Graaf has reached out for and found new depths in her songwriting. The more alternative/indie rock of her previous records has been let go of and a host of influences let in as substitutions.

Her singing has not so much changed. The rather thin, girllike voice presents itself no different. There still is that layer of modesty in the presentation, the holding back where emotions are concerned. At the same time De Graaf is singing as a woman who knows what she's doing and why, with the confidence to show. If she had doubts about her own qualities, they have been left behind as well.

It is in the musical make up that Amber Arcades has made giant leaps forward. Decades of music are let in. French yeah yeah, 60s pop, a little blue-eyed soul. Just listen to the start, the deceptively called song 'Simple Song'. An acoustic guitar strums, the band kicks in and some Burt Bacharach/Herb Alpert horns do as well. Soft and modest they glide over the slow memory. The oomph the song gets in the interlude part, including a Mellotron sound, shows that this song is deceptively simple. It sounds like a pre-chorus but turns out to be the chorus. 2.33 minutes is all. A 60s single length song, holding it all.

This level and distinction is kept up easily on European Heartbreak. In 'Hardly Knew' Annelotte de Graaf sings with so much ease. She doesn't have the voice of the female singers who had made it big in the age of my parents, the song could have been on their songbook. It is a song that transcends time and space. A song to potentially have been recorded in the 50s, 60s or 70s and in 2018. The kind of pop that has nothing to do with the charts of 2018. For the first time in years I heard a few songs in the national chart show in the car today. I had nothing going on for me there. Here though I am slowly melting away each time I hear 'Oh My Love (What Have We Done)' or 'Goodnight Europe'. Somehow Amber Arcades presses all the right buttons. Some songs are Beatlesque others even older, the kind of songs that influenced Lennon and McCartney when they started out.

This record is an album for all hours of the day. Late evening glass of wine music, early morning waking up and listening while working or reading. It works in all circumstances. Add the addictive tendency I have developed to put on European Heartache (together with 'Heartbreak Hi' of The LVE to be released on 26-10 and 'Ain't No Place' by TMGS) and I am writing about an album that holds it all it seems. As I started out with, an album that may score high on the 2018 WoNo Magazine chart of best albums. Listen in awe in the face of extreme musical beauty.

I am extremely curious what this translates into live. Follow this blog as the answer will be provided on 26 October.