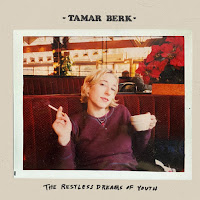 Why?, you might ask, as there multitudes of alternative rock albums. All true, but there's always room for one more good one in a collection, especially when it adds to what is already out there. Good songs, nice melodies and a voice worthwhile listening to. Tamar Berk scores points on all three criteria.

She has played in several bands in Chicago and Portland, Oregon, before deciding it was time to make a solo album. Reading her Bandcamp page, I conclude the album is extremely personal. The songs tell of growing up feeling insecure, feeling an inner void, unsure of what her life is all about. Also, the songs tell of her dealing with these feelings after having grown up and that feeling like this is o.k. Perhaps recognising that it is more or less the same for everyone around her and beyond. That it's all in a person's character how we deal with the senselessness of it all. We are here for one reason only: keeping the species alive or "I'm nothing but a lump of clay", as she sings. In the meantime we have to fill our time. Tamar Berk enriches her life in the form of writing beautiful songs for others in the world to enjoy. Songs that can make them feel good. This certainly counts in my case. Her music has a positive effect on me. Can I ask for more of someone I do not know and would never have heard of, had she not reached out to me? No, I can't, but I can share my gratitude in the form of this review and share her record with you.

The Restless Dreams Of Youth is a very varied album. It is an album that I dare to put next to the album that is the measure of things where female fronted alternative rock meets perfect pop melodies: 'Eight Arms To Hold You', Veruca Salt's only worthwhile album. Exuberant, forceful and filled to the brim with golden melodies. Tamar Berk's album is more varied than Veruca Salt's, less filled with huge sounds and exuberance. It dares to take a step back to reflect on life and the music, within a song. This results in songs that are more acoustic without becoming a ballad. ''til I've Won' may start softer, with a piano in the lead, but slowly but surely is fleshed out and grows and grows. It's just one of several examples of how Tamar Berk presents her songs to the world.

Tamar Berk's voice shines on her album. She shows the different textures within it. Deeper, softer, higher, lead and harmonies, they all come by within every song. Her varied voices enrich her album considerably. Add that she plays most instruments herself and her achievements shine a brighter once again. The drums are for Matt Walker. Incidentally the bass and some lead guitars are played by others, but that is it. Co-producing the album with Matt Thompson, Tamar Berk can call The Restless Dreams Of Youth her album and, let me add, one she can be proud of.

Getting older puts things more into perspective. Restless dreams at time occur but at times can be recognised for what they are, weird play things of the subconscious mind. Sometimes best to ignore, sometimes to use for learning more about yourself and every once in a while just, plain scary. Getting older allowed Tamar Berk to write this beautiful album holding some great alternative pop songs filled with nice melodies and guitar riffs. That counts in my book.

Only one question remains. Is Tamar related to Simone of Kid Gulliver who regularly featured on this blog in the past two years?

You can listen to and order The Restless Dreams Of Youth here: