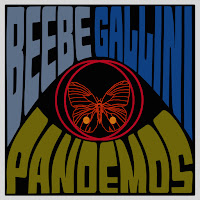 A few singles have already come by in the past couple of weeks and here comes the whole record. Beebe Gallini does not hold back and throws a net over the whole wide world under which nothing but garage rock can be heard. Sweet and dirty, rough and nice are some words describing the band's debut album quite accurately.

Take a listen to Pandemos and the whole of (garage and punk) rock washes over you. The album is one big feast of recognition, coming through to me in the form of original songs. Nobody objects when hearing a familiar chord progression when listening to 'My Way Of Thinking' as this is fully a new song using familiar building blocks. Come around till the end of the day to my way of thinking. I don't care, I certainly will.

Beebe Gallini is the other band of Miss Georgia Peach and Travis Ramin and believe it or not, and this may come of a bit of a shock to fans of a softer kind of music, this is the softer of the two. (Now The Short Fuses, that's a hardrockin', dirty outfit!) Together with Amy Larson Pearson (bass and backing vocals) and Moet Wong (lead guitar and backing vocals) the two really rock out.

That rock is of the essential sort. Don't expect a lot of niceties or embellishments. My guess is that what we hear is what it was in the studio. Pandemos is what Beebe Gallini is. It rocks and it rolls. Yes, there are accents in the music giving a little flavour to a song but nothing that is not straightforward.

At this point in time I hear a cover of 'To Love Somebody', one of the very early Bee Gees songs, on the radio show my girlfriend listen to in the morning and I switch on for her nowadays. It is even sweeter than the original, from, so I understand, a singer from one of those tv talent shows. 'To Love Somebody' is a part of Pandemos too. The kind of cover of the song I do not mind hearing. (Full disclosure: Yes, I am an early Bee Gees fan. I truly liked most of the songs as a little boy. And in 2021 I have to admit that 'Staying Alive' is a damn good song.) What it shows, is what someone with a little imagination can do with a song like 'To Love Somebody'. I was even made to believe for a few seconds that I was going to listen to the ballad of Pandemos. Hah, was I put on the wrong foot. It sets the pace for what is still to come alright, including that fine, fine song 'Nobody Loves The Hulk'. All garagerock fans will from this moment onwards, believe me.

You won't hear me saying that Pandemos is an exceptional album. No, it is not, but it is so much garage rock fun. It is a great to spend a half hour with.

You can listen to and order Pandemos here: