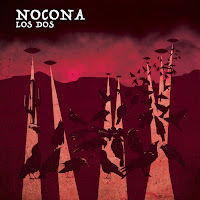 Los Dos is an album that in essence needs as little words as the album title: familiar - good. That could do it but I will write a little more. Simply because the album sounds so familiar and is good.

To place the album the words Americana, Southern rock and roots rock would all work. What I'd like to add are touches of The Kinks on 'Mushwell Hillbillies', of course U.S. influenced, that shines through as well.

Nocona is a band I had never heard of, so let's take a look at the band itself first. Nocona is from Los Angeles and releases its third record with Los Dos. The band at heart is a trio, the couple Chris and Adrienne Isom and drummer Justin Smith. Additionally four other musicians play on the album. A fiddle, harmonica and pedal steel show that the band recreates music from bands in the 70s for which it was normal to have country related instruments in the band.

The next step is what does Nocona do with its influences. That actually is a lot. 'Tabernacle Woes', what a title btw, does not go down any obvious path but explores other musical avenues. Not necessarily new but certainly more challenging for the average music lover. Without being musically extremely related, let me say like 'Brown Sugar' relates to 'Moonlight Mile' and the end of 'Can You Hear Me Knocking' on 'Sticky Fingers'. 'Tabernacle Woes' comes as a total surprise as the album opens deliciously familiar in sound, but is only the starting point for all to come.

The Rolling Stones is not a totally random mention. Nocona does borrow a little form the band from around 1970 and infuses that with more traditional country (rock) elements from the U.S. The result is a very diverse and interesting set of songs constituting Los Dos. The outcome is that Los Dos holds fiery rockers, more traditional country songs and experiments. The band as a whole does not need to follow everything. 'Too Much To Lose' is bass, drums, guitar(s) and a wild piano played by Carl Byron. But wait, isn't there a little sliding on the peddle steel in the mix any way? Yes, there is.

The result is that Nocona tickles a lot of my fancies. In each song there is more than enough to enjoy for a lover of the classic rock era where bands experimented with other genres. There's even some Pink Floyd/David Gilmore style guitar playing coming through loudly in the solo in 'Unseen Hand', that is a country rocking song when all is said and done. The slide part is great as well. Country prog-rock? Is that a existing moniker? Perhaps it should be invented if it wasn't. The album ends quite traditionally as if to soothe the not so experimentally inclined with 'Ace in The Hole'. This song qualifies as one of the best songs The Jayhawks never wrote; immediately and without reserve.

In other words Los Dos is an album that is far removed from your run of the mill new album. In the garage of the Isoms, where the album was conceived before finished in a real studio, a very special atmosphere must have been present. To be a neighbour could be gruelling of course but just imagine being able to hear the conception of this extremely interesting and good album. Life could be a lot worse.

You can listen to and buy Los Dos here: