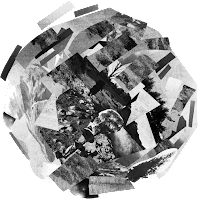 It was somewhere late summer that I was alerted to the coming of this album. The songs I was allowed to hear showed real promise and I can only say that this promise is totally fulfilled. 'Wooden Soldiers' is a rich album showing a few sides to this Utrecht based band that are very much worth while spending time with and to get to know intimately.

Wooden Soldiers has released two EPs in the past few years but was unknown to me until I listened to that first link. So let me first introduce the band: Frank Wolff sings and plays guitar, Agnes Loonstra sings and plays synthesizer, Nora Iburg sings, Jan van der Hoeven plays bas, Bart van Gemert drums and Marthe Lasthuis violin. Late in 2019 it is time to really show how good the band is.

Musically 'Wooden Soldiers' starts from a folk idiom. It is only a starting point as the band is keen to show its melodic strength at every single opportunity. The lead voice alternates between male and female, the harmonies are stooped in the example CSN&Y have set for the world. Wooden Soldiers is not afraid to pick up this standard and get to work with it to make its own songs so much stronger and interesting.

The songs on 'Wooden Soldiers' are never exuberant. There's always a hint of sadness woven in there. A kind of sorrow that the power of music cannot conquer. What the music can do is make the sorrow seem larger and ever present, with as result music that touches the listener with ease. The voices of Wolff, Loonstra and Iburg underscore this mood.

It is through the use of drums and bass Wooden Soldiers beefs up its music. At the right moments its songs get a good kick making them come alive and sparkle despite the somewhat glum overall mood. Due to the use of a mandolin and violin and way of singing the folk remains present, the rhythm section makes the songs verge towards a solid form of folk rock.

At the beginning of this week I wrote about Laïs and how this band developed into many directions, leaving traditional folk far behind. Wooden Soldiers regularly manages to do this on its debut album. 'Wooden Soldiers' may have a dark streak, but anyone listening to 'Garden Part 2' will find that joy and lust for life are baked into this music. The beginning of the next song, 'My Name', is so strong that anyone doubting this album has to become convinced of how good it is. Beauty is what 'My Name' is. And just wait for that song ending it all, 'I Do'. So silken soft and bittersweet it is, so moving.

Summing up, 'Wooden Soldiers' is an album that has won me over. The quality is convincing, the variation between the songs excellent and the music and singing a joy to listen to. An extremely nice autumn surprise.