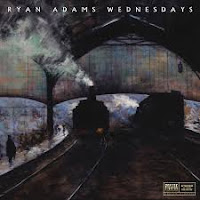 A lot has been written and said about Ryan Adams in the past years. He may want his "career back", but it is a serious question whether enough water will ever pass under the bridge. Perhaps time will do its work. A thing that helps, is to release new work and that is what Adams did late last year.

In the first years of this century Ryan Adams entered my life with a set of fantastic albums, containing some great songs. Slowly but surely the output kept rising but quality did not always match quantity and I lost interest in Adams' output. When the #MeToo affair landed at his doorstep, I hadn't listened to any of his albums for years.

Wednesdays is a new album, the  first one in several years. Because he is Ryan Adams I took a listen. What I found, is an acoustic album where Adams lets out his inner Neil Young. The singer-songwriter Neil Young that is. Even the wail in the voice is there at times.

I find myself enjoying Wednesdays more than a little. The elementary songs are simply pleasant to listen to. You will not find me calling this a masterpiece, as it is far from that. Ryan Adams hits all the right notes though. The songs open a soothing musical world, where his voice and acoustic guitar is all you need to get by.

It is not an easy thing to do, to keep up the interest while musically the songs are so elementary. Here Ryan Adams proves himself to be a true songsmith. I can't recall when a previous acoustic album was released nor what it was called. I found it deadly boring and could not get past the first few songs each time and gave up. With Wednesdays he grabs me in the first notes, only to let go at the very end.

What does a song take? A few sparse piano notes, an intricate guitar melody on the side, a harmonica? On Wednesdays the answer is yes. The overall mood is melancholy, sad even. It seems that from sadness, grief and anger the best albums are made. If that was the main inspiration for Ryan Adams, I'm sorry to say that I wish more of that on him (as an artist not personally, but how to make that distinction?) as it leads to a beautiful album.

Yes, I do would like to hear another louder album in the vein of his first two solo albums. In the mean time I'm quite happy with his latest album. In that sense I too am making a separation between the artist and the person, but also the person deserves a second chance after atonement. That is not up to me, so I listen to the music and that is of a very nice quality.