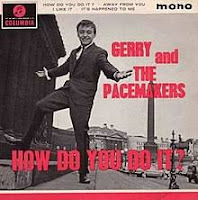 On 3 January it became know that Gerry Marsden, singer of the legendary  had past away after a short illness. This sad event led to a short digital conversation for three.

Gerry Marsden, the lead singer of Gerry and the Pacemakers, known for hits including You’ll Never Walk Alone and Ferry Cross the Mersey, has died at 78 after a short illness.

Yes very sad news, Gary - and so unexpected. A very sudden illness apparently. He regularly cropped up on TV programmes about the history of music in Liverpool. For me an especially poignant passing because Gerry and the Pacemakers headlined the first pop concert I went to in 1966 in Shrewsbury. I was 9 or 10 and it must have been shortly before the group broke up after the string of hits ended and the Merseybeat boom had become a distant memory. I well remember the thrill of Gerry's shiny Gretsch guitar flashing on stage.

I have the How Do You Do It e.p. with Gerry posing on the steps of St.George's Hall in Liverpool (photo attached). That was the song The Beatles were asked to record by EMI in 1962 but the lads stood their ground and rejected it in favour of Love Me Do. It's quite a catchy lively number but you can hear on Anthology 1 that they don't exactly sound that thrilled with it. 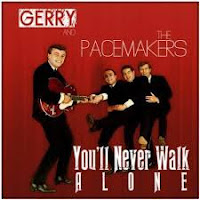 When eventually The Kop choir reconvenes on the Anfield terraces, I expect there will be a moving tribute with the song Gerry Marsden will be best remembered for. You'll Never Walk Alone was an obscure movie soundtrack song originally. Johnny Mathis released a version shortly before Gerry and the Pacemakers hit version. Mathis was a much more sophisticated vocalist with ballads than Gerry Marsden with his limited range. However, Gerry made it much more of a song for the people as demonstrated by the Liverpool fans picking up on it as their eternal anthem. It is an example of the revolution in popular music that the Merseybeat groups led by The Beatles heralded: Mathis was suddenly old hat and his records didn't chart anymore.
A Kop Choir rendition is briefly heard by the way at the end of Fearless on The Pink Floyd's album Meddle which I think is their most enjoyable album. There's some great guitar playing by David Gilmour on Fearless as well.  It's a great track to play LOUD!
Wout, 4-1:
Marsden's death made the 8 o'clock news, though with a very brief item. Despite knowing that his hits kept up with The Beatles' first hits until that band obliterated the whole Merseybeat competition from 1964 onwards, somehow I pack in Gerry and the Pacemakers with my parent's generation. Just like I did Trini Lopez, who passed away in the fall of 2020. The music never really appealed to me either. It was to neat, to fine groomed. Like 'Ferry Across The Mersey'. 'How Do You Do' is more like it, but his voice? No, that was never really for me. I wonder whether Marsden's fame would have been half as big without The Beatles kicking off the Merseybeat? 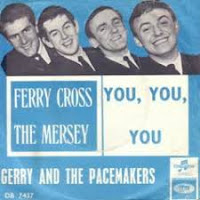 His huge hit was made more famous here by the singing cranedriver Lee Towers, who scored his best known hit in 1976 with 'You'll Never Walk Alone'. Being a supporter of Feyenoord, then Feijenoord, he somehow managed to make that song a club anthem, sung at least once during and before the match and performing live in the stadium before important games. Being a regular over the past years, I will own up that it is not as impressive as Liverpool's rendition. That honour will have to go to the club's foremost anthem, 'Hand In Hand Kameraden'.
That few years in age does show, Mark. My favourite Pink Floyd album will always remain 'Wish You Were Here', followed by 'Dark Side Of The Moon' and 'The Wall'. The difference between 'Meddle' and 'Wish You Were Here'? Four years!
And Johnny Mathis? He's 85 now and seems to have stopped recording in 2015 at the age of 80, spanning a 59 year long recording career. The list of (compilation/live/Christmas) albums and singles on Wikipedia is sheer endless. The reason I mention it, is that he scored a huge here in 1978 together with Deniece Williams called 'Too Much, Too Little, Too Late. The rest all passed me by I have to admit.
Gary
Mark
Wout
Gepost door Wo. op 08:30