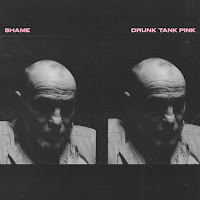 Three years and three days ago Shame released its debut album. Of course the band toured the world, remember those days?, extensively, but, three years and three days? This suggests a serious writer's block in my opinion. The first songs I heard from what was to become Drunk Tank Pink suggested a writer's block, as they lacked the intensity of the post punk debut, that fantastic 'Songs Of Shame'. The album that for me made it the top of the 2018 postpunk revival and still does. So where am I after having been able to spend more time with Drunk Tank Pink?

That answer is a lot simpler than I had expected it to be by mid November when the band released the second single, 'Water In The Well'. For two reasons. The first is that I have found that the songs on Drunk Tank Pink, and perhaps even Shame's oeuvre overall, are better on an album than as a single release. The energy simply comes across so much better when I listen to the album. The second reason is that I've gotten attached to the music on Drunk Tank Pink less easily but came across soon. There's more postpunk and new wave in this album. The music is more complex, so more Talking Heads than U.K. punk of 1977 with a twist of later knowledge added for good fun. The rhythms are at times simply weird. Of the kind that I wouldn't know how to replicate for the life of me.

It resulted in me having to work harder to get into the album. I have found that it is very much worthwhile to make the effort. The snottiness is still in the singing of Charlie Sheen. Singing between talking, shouting and screaming, he makes his points right in the face of the listener. There's no holding back here. Just like the band doesn't.

I'm not surprised to read that James Ford produced Drunk Tank Pink. The Arctic Monkeys of the 00s are a feature of Shame's music on this album, but not without noting that Shame goes way beyond the tightness of Arctic Monkeys at the time of 'Favourite Worst Nightmare'. This is a full production, where all instruments are presented as a whole, leading to a full mix. The result is a lot of energy pouring from my speakers.

As a final reference I'd like to point to Gang of Four. Shame has certainly listened to that band or bands influenced by it. I have never been able to enjoy the music of post punk bands like Gang of Four. Most were not able to write a decent song. Almost robotic music. Shame finds that balance between rhythms, melody, energy and weirdness. The result is songs to sing and dance to and to listen to at home. The energy I was missing in some of the singles can be found in abundance on Drunk Tank Pink, apparently a dark kind of pink paint, so all landed on its feet, dancing, singing and all,

So where is Shame on my list of postpunk bands of the 2018 generation? Quite simple answer that is: absolutely on top still. Personally I haven't heard a better album yet by one of the other bands. Two out of two is great. Finally the band has 21 songs to tour on instead of 10. I hope it has used the Covid period to write some more and release them soon. Touring will be a while, I'm afraid. Drunk Tank Pink is the first grand cru release of 2021. Does claret go well with drunk tank pink?

You can listen to and order Drunk Tank Pink here: